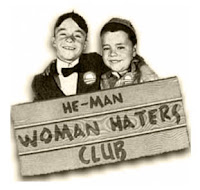 On a Believers Voice of Victory episode that aired today, David Barton told televangelist Kenneth Copeland that women are most elevated in a society that has “conformed to the Scriptures.” Citing Religious Right activist Rabbie Daniel Lapin, Barton said that the Bible is actually the basis of women’s rights, while in “Islam” and secular societies like France and “the Norwegian countries,” women have fewer rights and less respect. Perhaps Barton should read The Handmaid’s Tale before arguing that women will prosper in a society run strictly according to biblical law.

For those unfamiliar with Barton, you can learn more than you'd care to know in this profile by The People For The American Way:


Newt Gingrich promises to seek his advice and counsel for the 2012 presidential campaign. Mike Huckabee calls him America’s greatest historian, says he should be writing the curriculum for American students, and in fact suggested that all Americans should be “forced at gunpoint” to listen to his broadcasts. Michelle Bachmann calls him “a treasure for our nation” and invited him to teach one of her Tea Party Caucus classes on the Constitution for members of Congress. State legislators from around the country invite him to share his “wisdom” with them. Glenn Beck calls him “the most important man in America.” Who is this guy?

This guy is David Barton, a Republican Party activist and a fast-talking, self-promoting, self-taught, self-proclaimed historian who is miseducating millions of Americans about U.S. history and the Constitution.

That's just the tip of the iceberg. Read the full report for a complete picture.

Barton is not the only high profile conservative Christian figure (or organization) to favor a Biblical view of women. The recent Republican onslaught of Draconian measures against women's health is rooted in Biblical law. Michele Bachmann's "submission" to hubby Marcus has obvious Biblical ties. Constitutional lawyer and conservative activist Phyllis Schlafly believes women cannot be raped by their husbands. Family Research Council President Tony Perkins seemed to think that it might be okay for Sarah Palin to run for office, since an elected official is not a spiritual leader. Christian bookstores yanked Gospel Magazine off the shelves because its cover featured (gasp!) female pastors. A full-page ad ran in USA Today affirming that a "wife is to submit herself graciously to the servant leadership of her husband." The affirmation was signed by Mike Huckabee, Franklin Graham, TD Jakes, Tony Evans, and others.

So, if Barton and others believe that Biblical law is such a great source of guidance on the treatment of women, maybe we should look a little closer at how the Bible handles women's rights:

"And I will put enmity between you and the woman, and between your offspring and hers; he will crush your head, and you will strike his heel.” To the woman he said, “I will make your pains in childbearing very severe; with painful labor you will give birth to children. Your desire will be for your husband, and he will rule over you.” - Genesis 3:15-16

And Adam was not the one deceived; it was the woman who was deceived and became a sinner. 15 But women will be saved through childbearing—if they continue in faith, love and holiness with propriety. - 1 Timothy 2:14-15

If two men are fighting and the wife of one of them comes to rescue her husband from his assailant, and she reaches out and seizes him by his private parts, you shall cut off her hand. Show her no pity. - Deuteronomy 25:11-12

But I tell you that anyone who divorces his wife, except for sexual immorality, makes her the victim of adultery, and anyone who marries a divorced woman commits adultery. - Matthew 5:32

If a man marries a woman who becomes displeasing to him because he finds something indecent about her, and he writes her a certificate of divorce, gives it to her and sends her from his house. - Deuteronomy 24:1

If a man happens to meet a virgin who is not pledged to be married and rapes her and they are discovered, he shall pay her father fifty shekels of silver. He must marry the young woman, for he has violated her. He can never divorce her as long as he lives. - Deuteronomy 22:28-29

A woman who becomes pregnant and gives birth to a son will be ceremonially unclean for seven days, just as she is unclean during her monthly period. On the eighth day the boy is to be circumcised. Then the woman must wait thirty-three days to be purified from her bleeding. She must not touch anything sacred or go to the sanctuary until the days of her purification are over. If she gives birth to a daughter, for two weeks the woman will be unclean, as during her period. Then she must wait sixty-six days to be purified from her bleeding. - Leviticus 12:1-5

If a man happens to meet in a town a virgin pledged to be married and he sleeps with her, you shall take both of them to the gate of that town and stone them to death—the young woman because she was in a town and did not scream for help, and the man because he violated another man’s wife. You must purge the evil from among you. - Deuteronomy 22:23-24

If a man sells his daughter as a servant, she is not to go free as male servants do. If she does not please the master who has selected her for himself, he must let her be redeemed. He has no right to sell her to foreigners, because he has broken faith with her. - Exodus 21:7-8

Women should remain silent in the churches. They are not allowed to speak, but must be in submission, as the law says. If they want to inquire about something, they should ask their own husbands at home; for it is disgraceful for a woman to speak in the church. - 1 Corinthians 14:34-35

A woman should learn in quietness and full submission. I do not permit a woman to teach or to assume authority over a man; she must be quiet. - 1 Timothy 2:11-12


Sometimes I wonder if folks like Barton have actually read the Bible. Anyone who has spent any amount of time with the scriptures knows that the Bible is probably one of the last books you'd consult for guidance on women's rights.

I have yet to see a modern secular justification for barbaric, oppressive treatment of women. A society that chooses to comport to ancient scripture on matters of human rights is a society based on male dominance, misogyny, and injustice.