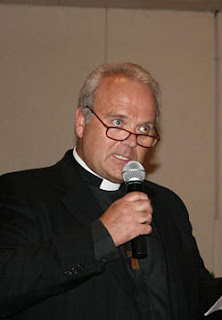 The Editor in Chief at Catholic Online, Deacon Keith Fournier wrote a piece praising the hordes of 'pro-family,' 'pro-marriage' supporters who showed up to buy sandwiches and waffle fries on Chick-Fil-A Appreciation Day.

The Deacon, like millions of Americans who lined up last week, doesn't seem to get it.


The massive crowd reflected a cross section of America. They were young, old, middle aged and senior. They were thin, overweight, short, tall, well groomed, sloppy, well dressed, tattooed and of every race and color. There were young Moms with their children in tow, blue collar workers, students and business men and women. Amazingly, everyone was kind, courteous and willing to wait in line. No-one complained and most were smiling.

In fact, you sensed you were participating in something historic by simply purchasing a chicken sandwich. I do not doubt everyone wanted their chicken sandwich, especially after such a long wait. However, they were there, like me, for a reason much more important. They were making a collective statement of support for the Restaurants' willingness to stand up for marriage and family in the face of open hostility, ridicule and threats.

They were standing up for free speech and against political correctness. They were applauding with their purchase the courage shown by the owners of this restaurant. They did not back down in the face of forceful, even hateful, opposition from those who, while claiming to be tolerant have become so intolerant of those who do not agree with them.

Last week I wrote about how this flap is not about free speech, and I still stand by that assertion. (It was pointed out to me by several readers that the threats by elected officials to ban Chick-fil-A from their cities was very much about free speech, and I would agree -- if any of these threats were actually implemented. The comment of Rahm, Menino, et al. amounted to grandstanding and the type of knee-jerk reactions we expect from elected officials.) But the consumer boycott itself, and the outcry against Chick-fil-A has absolutely nothing to do with stifling free speech and everything to do with consumers refusing to indirectly fund hate and intolerance.

While Chick-fil-A Dan Cathy's remarks certainly were inflammatory to those who are in same-sex relationships and those who support equality, his vocal remarks were not the reason for the boycott. Boycotts of Chick-fil-A have been in existence prior to Cathy's comments. Cathy's remarks simply provided a prime opportunity for discussion of Chick-fil-A's substantial annual donations to organizations that perpetually spew hate and widely-dismissed anti-LGBT propaganda.


Chick-fil-A has been under assault because their President publicly affirmed their company support for true marriage and the family and society founded upon it. Dan Cathy expressed his deeply held religious convictions to the Baptist Press in an interview and literally - all hell broke loose among some new Cultural Revolutionaries.

Among the most vocal opponents was Carlos Maza of "Equality Matters", a homosexual equivalency activist group. He told the Washington Post that Dan Cathy's position in defense of marriage, along with the contributions made by his family's foundation to pro-life and pro-family groups, "solidifies Chick-fil-A as being closely aligned with some of the most vicious anti-gay voices in the country." That is nonsense. To defend marriage does not equate to being "anti-gay".

The effort unleashed against Chick fil-A was an example of viewpoint discrimination parading as a concern for equality.

When abolitionists focused attention on the inhumane nature of slavery, they were guilty of "viewpoint discrimination."

Furthermore, when Carlos Maza of Equality Matters stated that the restaurant's policies, donations, and actions "solidifies Chick-fil-A as being closely aligned with some of the most vicious anti-gay voices in the country," he was absolutely correct. If the good Deacon needs any evidence, there's plenty of it on record.