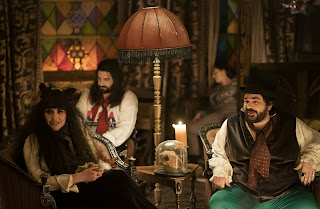 
Undone:
Amazon's genre-bending animated series is one of those shows that most people explain by saying, "you just have to see it." According to Amazon, 'Undone' explores "the elastic nature of reality through its central character, Alma. After getting into a near fatal car accident, Alma discovers she has a new relationship with time and uses this ability to find out the truth about her father's death." That's not a bad elevator pitch, but it leaves out the fact that it's visually stunning, using an animation technique called rotoscope to produce the mind-bending visuals necessary to tell this interdimensional time-travel story. Similar to the style of Richard Linklater's 'A Scanner Darkly,' these are real actors (including Rosa Salazar and Bob Odenkirk) playing the roles, but it's as if each frame has been painted over by hand, giving it a dream-like quality, in which characters can float or be transported to another time, space, or dimension. It's a lovely, thought-provoking, and thoroughly engaging meditation on mental illness, loss, grief, family, and heritage.
Raised by Wolves:
This Ridley Scott-produced HBO Max sci-fi serial has to be the most pleasant TV surprise of 2020. I'm not a huge sci-fi nerd, although I do count Brazil, Mad Max: Fury Road, and Blade Runner among some of my favorite movies. I like my sci-fi dystopian, aesthetically stunning, intellectually stimulating, and I prefer to do some work rather than be constantly spoon-fed every detail or plot point. Raised by Wolves is all of this and more, exploring the nature of belief, morality, and free will (and so much more). Like Blade Runner, it also explores the nature of artificial intelligence -- at what point is an artificial life human, and can we trust artificial intelligence to make the most ethical/moral choices?
While there are many shows that compel you to binge, to devour as much as you can in one sitting, Raised by Wolves is a show to savor.  While it moves at a brisk pace, and is never dull, there is so much to take in, and lots to think about.  It's a show that rewards repeat viewings, and you may find yourself spending time reading critical analysis of each episode, or brushing up via the show's Fandom wiki. It's a show that takes place in its own unique speculative universe, with its own history, and much of the first season is spent acclimating you to its world-building. Four episodes in, and I'm hoping that the show continues for years -- it's that good.
Posted by eshep on 9/02/2020 No comments:

Email ThisBlogThis!Share to TwitterShare to FacebookShare to Pinterest
Tags: brassic, covid, euphoria, i may destroy you, raised by wolves, stath lets flats, streaming, television, undone, what we do in the shadows
Newer Posts Older Posts Home
Subscribe to: Posts (Atom)