Tebow 3:16 -- Coincidences, Odds & Our Need To Find Order In A Chaotic World 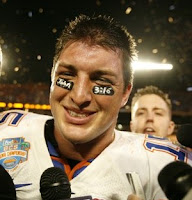 By now you've probably heard that Tim Tebow is a miracle worker. Last night, the bible verse-wearing, sideline-kneeling quarterback threw an 80-yard touchdown pass in overtime to lift his Broncos past the Steelers.

If the entire season had not already elicited talk of divine intervention, last night's overtime win put the miracle-speak in overdrive.

Tebow passed for 316 yards against the Steelers, completing 10 of 21 pass attempts. In other words, he passed for 31.6 yards per completion.

For those unaware, Tebow's favorite Bible verse is John 3:16.

Anyone who dipped into the Twitter stream last night would likely have seen the coincidences piling up. Many of them making any number of peripheral and mundane facts and figures into signs of the divine.

Sure, it's a neat story. The publicly devout Christian football player has had his share of come-from-behind victories this year. He has overcome the odds on many occasions. He happened to throw for 316 yards in the most important game of the year.

But does it prove anything? Is it more than a coincidence? I mean, seriously, what are the chances?

Lisa Belkin, in a wonderful 2009 New York Times Magazine piece on odds, coincidence, and our need to find order in our chaotic world, writes:


The true meaning of [coincidence] is ''a surprising concurrence of events, perceived as meaningfully related, with no apparent causal connection.'' In other words, pure happenstance. Yet by merely noticing a coincidence, we elevate it to something that transcends its definition as pure chance. We are discomforted by the idea of a random universe. Like Mel Gibson's character Graham Hess in M. Night Shyamalan's new movie ''Signs,'' we want to feel that our lives are governed by a grand plan.

The need is especially strong in an age when paranoia runs rampant. ''Coincidence feels like a loss of control perhaps,'' says John Allen Paulos, a professor of mathematics at Temple University and the author of ''Innumeracy,'' the improbable best seller about how Americans don't understand numbers. Finding a reason or a pattern where none actually exists ''makes it less frightening,'' he says, because events get placed in the realm of the logical. ''Believing in fate, or even conspiracy, can sometimes be more comforting than facing the fact that sometimes things just happen.''

Belkin reminds us of the mountain of coincidental details that many saw as meaningful after the events of 9/11:


We need to be reminded, Paulos and others say, that most of the time patterns that seem stunning to us aren't even there. For instance, although the numbers 9/11 (9 plus 1 plus 1) equal 11, and American Airlines Flight 11 was the first to hit the twin towers, and there were 92 people on board (9 plus 2), and Sept. 11 is the 254th day of the year (2 plus 5 plus 4), and there are 11 letters each in ''Afghanistan,'' ''New York City'' and ''the Pentagon'' (and while we're counting, in George W. Bush), and the World Trade towers themselves took the form of the number 11, this seeming numerical message is not actually a pattern that exists but merely a pattern we have found. (After all, the second flight to hit the towers was United Airlines Flight 175, and the one that hit the Pentagon was American Airlines Flight 77, and the one that crashed in a Pennsylvania field was United Flight 93, and the Pentagon is shaped, well, like a pentagon.)

Sound familiar? If we were to start digging though other statistics from the game, and from Tebow's life (and believe me, many are busy piling these up right now -- we will continue to see them trickle out this week), we would find an endless stream of forced, and increasingly thin, coincidences.

We would also find the same coincidences by crunching numbers related to our own daily lives -- even those of us who are not devout. The most breathtaking of happenings, Belkin says, could actually have been predicted by statistics.


The mathematician will answer that even in the most unbelievable situations, the odds are actually very good. The law of large numbers says that with a large enough denominator -- in other words, in a big wide world -- stuff will happen, even very weird stuff. ''The really unusual day would be one where nothing unusual happens,'' explains Persi Diaconis, a Stanford statistician who has spent his career collecting and studying examples of coincidence. Given that there are 280 million people in the United States, he says, ''280 times a day, a one-in-a-million shot is going to occur.''

Throw your best story at him -- the one about running into your childhood playmate on a street corner in Azerbaijan or marrying a woman who has a birthmark shaped like a shooting star that is a perfect match for your own or dreaming that your great-aunt Lucy would break her collarbone hours before she actually does -- and he will nod politely and answer that such things happen all the time. In fact, he and his colleagues also warn me that although I pulled all examples in the prior sentence from thin air, I will probably get letters from readers saying one of those things actually happened to them.

Robert J. Tibshirani, a statistician at Stanford University, uses the example of a hand of poker as a great example of how we ignore the millions of meaningless events in our lives, but find meaning in the events which happen to trigger a mental connection.

The odds that Tim Tebow passed for 316 odds are similar to the odds that he'd pass for 309. We simply would not have made any big deal out of it if he threw for 309 yards (except for the fact that it was impressive yardage that helped him win a game).

Still, the faithful will continue to insist that there simply has to be meaning. They will continue to say, "Coincidence? I think not," and ask, "What are the odds?" Again, these people are focusing on the seemingly meaningful connection, and ignoring real-world statistics.


There are as many as 366 days in a year (accounting for leap years), and so you would have to assemble 367 people in a room to absolutely guarantee that two of them have the same birthday. But how many people would you need in that room to guarantee a 50 percent chance of at least one birthday match?

Using similar math, you can calculate that if you want even odds of finding two people born within one day of each other, you only need 14 people, and if you are looking for birthdays a week apart, the magic number is seven. (Incidentally, if you are looking for an even chance that someone in the room will have your exact birthday, you will need 253 people.) And yet despite numbers like these, we are constantly surprised when we meet a stranger with whom we share a birth date or a hometown or a middle name. We are amazed by the overlap -- and we conveniently ignore the countless things we do not have in common.

We are pattern-seeking creatures. This is likely part of our biology, a behavior that evolved to help us survive. Early humans needed to be hyper-aware of anomalies in order to detect threats. And while these happy accidents provide many with hope and inspiration, our willingness to attach meaning also works to our detriment. We have, in many ways, become fundamentally irrational beings.


The more personal the event, the more meaning we give it...

The fact that personal attachment adds significance to an event is the reason we tend to react so strongly to the coincidences surrounding Sept. 11. In a deep and lasting way, that tragedy feels as if it happened to us all.

[This] sheds light on the countless times that pockets of the general public find themselves at odds with authorities and statisticians. Her results might explain, for instance, why lupus patients are certain their breast implants are the reason for their illness, despite the fact that epidemiologists conclude there is no link, or why parents of autistic children are resolute in their belief that childhood immunizations or environmental toxins or a host of other suspected pathogens are the cause, even though experts are skeptical. They might also explain the outrage of all the patients who are certain they live in a cancer cluster, but who have been told otherwise by researchers.

While the Tebow divine intervention anecdotes themselves are harmless, and while many may find inspiration and hope in his story, we must remember that there is a down-side to cobbling together random bits of information and forming a conclusion.

In some ways, the Tebow narratives reinforce many people's irrationality. We are simply too caught up in the feel-good nature of the story to realize that this is the same type of thinking that has fueled everything from truthers and anti-vaxxers, to bigotry and grilled cheese sandwich auctions. 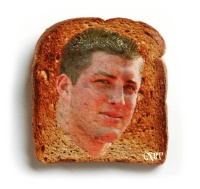