Thoughts On The Sandy Hook Shootings

This was vomited out in a ranty, knee-jerky fashion without edits or revisions. Please forgive my sloppiness and lack of references.

I'm getting pretty tired of hearing the following comments regarding the Sandy Hook shootings: 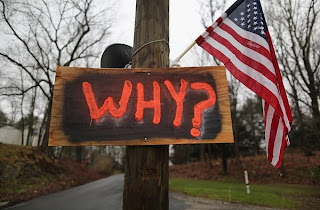 Yes. Things like this have always happened. People have killed other human beings for little or no reason for as long as humans have existed.

2. People might have killed other people in the past, but they wouldn't take out groups of innocent children and then kill themselves.
Yes. They have. Do some research.

4. This was due to the decline of morality in our society.
No. Mental illness doesn't care about morals. An individual with a normal and healthy brain with the capacity for empathy will not commit an act like the one in Sandy Hook.

5. If we had more religion in our societies and in our schools, we wouldn't see things like this happen. Mental illness does not discriminate. No amount of religion (or lack thereof) will keep a mentally ill individual from acting on violent ideation.

6. In the past, if someone was crazy, they'd maybe kill a few people at most -- they'd never enter a school and kill 27 people.
In the past, schools were smaller, our cities and towns were not as densely populated, and assault rifles (and associated rounds of ammunition) were not available on the internet. The internet is only a recent phenomenon. One room school-houses existed just a generation ago. Do the math. If a psychopath had walked into a schoolhouse with an ax or a musket in centuries past, they might get away with killing or maiming a handful of children. And you better believe that psychopaths did kill women and children in the past. We are often blinded by our own lack of appreciation of time and history.

7. This person was pure evil.
We love to exculpate ourselves from culpability. Evil is a human construct. There is nothing at all supernatural about a school shooting.

Let's be honest and admit that what makes these horrible recent events seem so unimaginable is the fact that in all of history, the recipe for such events has not been possible. Mental illness + easy access to assault weapons + densely populated cities, towns, schools, malls = unprecedented fatalities caused by lone actors.

This wasn't an act of evil. It is not a sign of a decaying morality. It cannot be attributed to a lack of religion. These kinds of incidents have always happened -- Americans simply live in a time characterized by a) easy access to assault weapons online 24/7 and in neighborhood stores in every town in America, b) a widespread lack of understanding about mental illness, the stigma associated with it, and the failure of parents, families, co-workers, and neighbors to identify the signs of serious mental illness, c) densely populated cities, towns, and buildings.

It's time we stopped making excuses, accept the realities of our time and place in history, and work to improve the contributing factors that we actually can control.
Posted by eshep on 12/19/2012 3 comments: