NC Pastor Fired After Doubting Existence Of Hell On Facebook

From the Daily Mail:

The pastor of a rural United Methodist church was fired from his job after voicing his doubts that sinners live an eternity of torment.

Reverend Chad Holtz was dismissed from Marrow's Chapel in Henderson, North Carolina, when he posted a note on his Facebook page supporting a book written by prominent young evangelical pastor Rob Bell.

Two days after he posted the comments, Rev Holtz was told he had been dismissed after complaints from church members.

Apparently, it wasn't just this particular comment that got Holtz fired:
According to Rev Holtz, church members had also been unhappy with Internet posts about subjects like gay marriage and the mix of religion and patriotism.
Come on, Methodists. Aren't you supposed to be the moderate ones?
Posted by eshep on 3/25/2011 1 comment:

The organization known as Creation Science Evangelism (or CSE) describes itself as a "leading Christian-apologetics ministry, defending the literal interpretation of the Genesis creation account from the theory of evolution...an international ministry with some of the most requested resources on the topics of creation, evolution, dinosaurs, and the Bible." 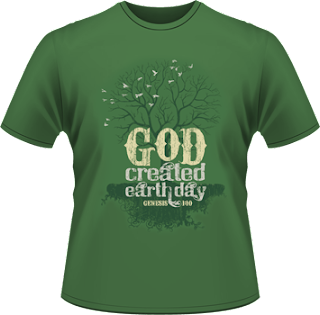 Well, CSE is not going to sit idly by as heathens appropriate Earth Day.  Or something.

CSE is promoting their website godcreatedearthday.com and selling t-shirts to spread their message.  The site reads:

Help us take back Earth Day—for God! Our desire for the God Created Earth Day campaign is to take a day that is man-made that focuses on God's creation, and turn the focus to God Himself! Our message is simple: "Creation points to the Creator!"

And hold on a minute. Aren't CSE the ones actually doing the appropriating here?
Posted by eshep on 3/23/2011 No comments:

I ran across two articles today about the challenges religions face in an evolving modern world, with both asking, in some degree, whether or not religion as we know it will survive. 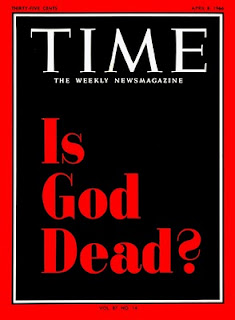 One, from the BBC, reports on a study conducted by a team of mathematicians, engineers, and physicists which concludes that religion is set for extinction in nine countries: Australia, Austria, Canada, the Czech Republic, Finland, Ireland, the Netherlands, New Zealand and Switzerland.  The study is based on census data going back as far as a century in those countries.  The study can be viewed online.

Another, from the Dallas Morning News asks, "Will Facebook kill the church?"  The question, prompted by a book by Richard Beck about social networking's effects on our need for a faith-based community, serves as a springboard for several Texas religious figures to respond.

While the news media (and the publishing industry) certainly thrives on projecting gloom and doom, the reality is that neither article serves up a death knell for religion, but rather provides more evidence of its constant evolution.  The scientific and technological advances of the past several decades have allowed the evolution to occur at a faster pace than we have seen in the history of religion.  The use of Facebook and the Internet has allowed unfettered access (in most parts of the world, anyway) to new religious (or non-religious) ideas previously available in print or via person-to-person contact.  As in the case of the above study, we have also been able to examine religion's evolution in greater detail.

While I do believe that we will see a global increase of "Religious Nones" (individuals who do not claim any religious affiliation), I do not believe that we are anywhere near a religious extinction in any country. We are, however, experiencing a growth of those who are less religious, who do not identify with any one faith, or who are more passive, and less vocal, about their religiosity.  We have also entered an era where individuals can chart their own spiritual courses.  In the way that technology has opened up new possibilities in the areas of intellectual property, art, and music, via sampling, mash-ups, and the re-purposing of existing concepts and ideas, we are seeing increasing instances of individuals crafting their own brand of faith.

This is not a death knell.  It is, however, a stark reminder that the rigid (and often static and antiquated) dogma associated with the world's major religions, is becoming incompatible with an evolving and increasingly inter-connected population.  Humans will never stop seeking answers to the mysteries of the cosmos, nor will they stop living by codes that help them navigate the challenges in modern life.  They will, however, go about it in ways that are not aligned with any of our existing major religious institutions.
Posted by eshep on 3/22/2011 No comments: