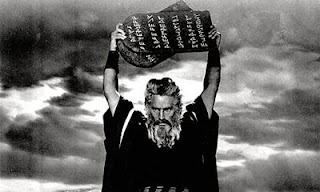 Do a Google News search for "Ten Commandments" at any time, and you will find hundreds of articles about dozens of flaps over the placement of the commandments in public spaces -- courtrooms, schools, parks, etc.  The Ten Commandments have become such a monolith of our culture that many assumptions are made about them, the most common being that the United States is a Christian nation with founding documents steeped in Judeo-Christian dogma, and as such the nation was founded on God's law.

While courts continue to argue their appropriateness in courthouses and schools, it seems that we never stop to consider whether or not The Ten Commandments themselves are a useful tool in guiding our morality.  The Ten Commandments are something that nearly everyone is familiar with, as a concept, and as a sum of its parts.  But so many of us, even many Christians and Jews, could not recite them, even out of order, if our lives depended on it. In 2007, in a survey conducted by Kelton Research, 80% of those surveyed knew that "two all beef patties" were ingredients in a Big Mac, but only less than 60% knew the commandment "thou shalt not kill." Sixty percent of those surveyed could not name five of The Ten Commandments. (If you're feeling self-conscious now, feel free to brush up on them here.)

Even if we could remember The Ten Commandments, how useful are they in actually dictating our morality? We often hear people say things like, "Without The Ten Commandments, people would have no reason not to kill or steal."  Comments like that make me wonder about the moral fabric of the people who say such things.  Is a simple commandment the only thing standing between them and cold-blooded murder, or a shoplifting spree?

Dan Barker, a former Evangelical Christian preacher, songwriter, and performer, has spent some time dissecting The Ten Commandments and gauging their usefulness.  In various writings, including his book Godless, he has pointed out that only three of the Ten Commandments have any relevance to American law: homicide, theft, and perjury.  He points out that Adultery and Sabbath laws are on the books in some states, but are artifacts of theocracy.

Commandments one through four (no other gods, graven images, Lord's name in vain, and the Sabbath) have absolutely nothing to do with morality, offering no suggestions on how we should treat each other.  We've nearly gone through half of them and have only been told how we can please the Abrahamic God.

The Fifth Commandment, "Honor thy father and thy mother," is the first one that even begins to sound moral.  It's decent enough advice, but, as Barker points out, it's vague (how exactly do we honor them?) and in some instances could end up badly (what if your parents are abusive, or terrible advisors?).

"Thou shalt not kill," the Sixth Commandment, is a good one.  It took us six commandments to actually get to a moral statement, one that addresses doing actual harm in the real world.  Although, Barker notes, it doesn't tell us what we should do about war, capital punishment, self defense, and other ways in which killing is legal in the United States.

"Thou shalt not commit adultery," Commandment seven, is also good advice, but not against the law.

Commandment Eight, "Thou shalt not steal," is good advice, and is the second commandment that actually applies to our laws.

The Ninth Commandment, "Thou shalt not bear false witness," is also good advice, but lies are only occasionally illegal in America, under very specific circumstances.   And although this is generally good moral advice, there are instances when following this commandment would cause more harm than not following it.  There is the old thought experiment where you are housing Jews in Nazi Germany, and a Nazi soldier comes to the door to ask if there are Jews in your home.  This is a time when our natural empathy and morality trumps any absolute on a stone tablet.

The Tenth Commandment, "Thou shalt not covet they neighbor's wife/house/ox, etc." -- this is ok advice, but hardly something that pertains to American law.  Barker points out that without a nation of Tenth Commandment-breakers, "our entire system of free enterprise would collapse."

So, after going through The Ten Commandments, Barker says, we have "four religious edicts that have nothing to do with ethics, three one-dimensional prohibitions that are irrelevant to modern law, and three shallow absolutes that are useful but certainly not unique to the Judeo-Christian system."  Barker states that any one of us could very easily come up with a more sensible, thorough, ethical code for human behavior.

It should be clear, after actually examining and thinking about The Ten Commandments, that they serve no purpose in a courtroom (or school, etc.) other than to bolster those who are adamant that America is a Christian nation.  A judge could glean no legal advice from any of the commandments, of which only a few apply in any way to US law.

The Ten Commandments are interesting from a historical perspective.  It serves a population well to be religiously literate.  We certainly are better off knowing and understanding them, and where they came from, than knowing the ingredients of a Big Mac.  But if we believe that these are our best moral guide, we are fooling ourselves.  We could toss The Ten Commandments as a moral guide, and replace them with one suggestion that, if followed, would provide an actual moral and ethical code: Always act to minimize the suffering and increase the well-being of living things.  It is a guideline that does not rely on absolutes and requires that we analyze our actions and weigh the outcomes of each choice we make.  And in another two thousand years, it will make as much sense to those still walking the earth as it does today.
Posted by eshep on 2/26/2011 5 comments:

Pro-life conservatives have been using every trick in the book to chip away at Roe v. Wade since the landmark 1973 Supreme Court decision.  Recently, we've seen the Personhood movement, the calls to de-fund Planned Parenthood, the GOP's attempt to re-define rape ("If no force is involved, it's not really RAPE-rape, is it?") as a way to reduce instances of federally funded abortions, and bills in Iowa and Nebraska to allow for "Justifiable Homocide" defense against abortion doctors.

But something is brewing in Georgia that takes the cake.  Georgia State Rep. Bobby Franklin has introduced a bill to criminalize miscarriages and outlaw abortions completely.  Any "prenatal murder" according to the bill, including "human involvement" in a miscarriage, would be a felony and would be punishable by life in prison or death. Yes, death. The bill states that "The State of Georgia has the duty to protect all innocent life from the moment of conception until natural death. We know that life begins at conception."  Yes, that's right. All blastocysts, zygotes and embryos are fetuses, according to the bill, and destruction of any constitutes murder.  The full text of HB 1 can be found here. (Warning: your head may explode.)

The strategy of such bills, it must be noted, includes pushing for legislation that is overreaching and/or provocative such that by compromising on the "crazy" part of the bill, the not-so crazy parts get passed in some form (These parts are usually crazy too, until juxtaposed against the bill's crazier parts).

Over at Bob Cesca's Awesome Blog! Go!, a reader (and MD) writes about the chilling effects of such a bill:

"Since 30-90 percent of fertilized eggs spontaneously abort, seems, according to Franklin, every woman should be required to track their menstrual cycle, and if there is a variance, they need to account for it to authorities, such that a spontaneous abortion can be investigated to determine if somehow the woman was responsible for the death of a human being."

Sure, this example is hyperbolic to some degree, and Rep. Franklin and the pro-lifers would certainly argue that this is not about punishing those who miscarry under "normal" circumstances.  But who is to decide what is "normal?" And how is a miscarriage's "legality" ascertained?

And isn't it interesting that the same core group of folks who want smaller government and less government intrusion want  to monitor your menstrual cycle?  They want the TSA to stop touching their junk, but want the menstrual police up in yours?

Where Is Our Fred Rogers?

In 1969, Fred Rogers appeared before the United States Senate Subcommittee on Communications to testify in support of  the Center For Public Broadcasting, which was facing cuts in funding.  President Nixon had proposed cutting the budget by half, in part to allocate more money for the Vietnam War.

Four decades later, war is threatening to de-fund public broadcasting.  This time, however, it's the culture wars.  While one could argue that the de-funding is simply a matter of frugality in a time of economic uncertainty and record debt, there is no doubt that public broadcasting's perceived hostility towards conservative values is the real reason.  Droves of conservatives began asking for Big Bird's head on a platter immediately after the firing of Juan Williams for comments he made on Fox about Muslims in October of 2010.

When the heat was on in 1969, Fred Rogers delivered a wonderful and powerful testimonial on the importance of positive, enriching, educational (and commercial-free) programming for children.  I don't know many people who did not grow up with PBS and NPR, nor do I know any who can imagine what that world would have been like.  I also don't know anyone who can watch the below video without getting a lump in their throat.  But where is our Fred Rogers now?

Why Do Creationists Play The Hitler Card?

Creationists love to play the Hitler card when critiquing the theory of evolution.  Ken Ham, of the Creation Museum, loves to bring up Hitler when discussing Darwin.  It is tirelessly trotted out in court cases deciding whether or not Creationism should be taught in school. The argument essentially is an effort to vilify the teaching of evolution by linking Darwin, and his conception of natural selection, to Nazi eugenics efforts.

I was reading an article in LSU's Daily Reveille, published on Sunday, about Sid Galloway presenting his "Evidence — Answers Seminar" at the Chapel on the Campus.  In his seminar, Galloway, who is a zookeeper, a biology teacher, and a family counselor, suggested that evolution fuels racism, stating:

"If you read [Charles Darwin's] ‘Descent of Man,' it's obscenely racist," he said. "At the core of Hitler's belief was evolution."

Galloway, who believes the universe is thousands of years old, not billions, said evolution directly contradicts Christianity, because suffering would have existed in the world long before Adam and Eve bit into forbidden fruit.
"They cannot both be in harmony," he maintained. "They are incompatible."

The use of the Hitler card, when critiquing evolution, is not unlike the mudslinging in political campaign seasons.  It is a tactic used to distract and to sully by association.  The difference here is that whether or not Darwin's theory of evolution inspired Hitler, it does absolutely nothing to detract from the soundness of the theory.

Imagine a seminar being given by a figure who denied the germ theory of disease.  Suppose this figure stated that Agostino Bassi's and Girolamo Fracastoro's work on this theory inspired the weaponization of tularemia, anthrax, brucellosis, and botulism toxin.  Sure, this is an ugly, destructive application of the concepts of the theory, but is anyone less likely as a result to believe that the germ theory of disease is sound?

Is the theory of gravity any less true, or less palatable, because millions of people have put to death by hanging?

Like the politicians that sling mud during campaign season, the Creationists who use this tactic only draw attention to their own desperation, slinging mud against the wall in hopes that something sticks.
Posted by eshep on 2/22/2011 No comments: