I was always a big fan of Scooby Doo as a child. I hadn't watched it in years until I had children of my own. Watching the show again as a skeptic and a Secular Humanist, it wasn't lost on me that, at the end of every episode, we are reminded that there are no such things as ghosts. 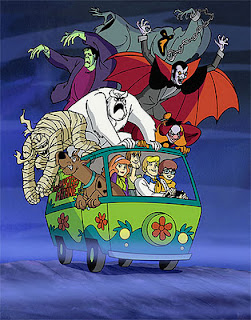 Aside from being good fun for the kids, Scooby Doo teaches us that we shouldn't believe everything, that sometimes you need to roll up your sleeves to get to the bottom of things, and that even the most bizarre phenomenon has a natural explanation.

Chris Sims at Comics Alliance has spent considerable time thinking about this, apparently. He has penned a post called Scooby-Doo and Secular Humanism. I probably wouldn't have run across it had it not been BoingBoing'ed today (they called the cartoon the 'Veggie Tales for Secular Humanists' -- heh).


Because that's the thing about Scooby-Doo: The bad guys in every episode aren't monsters, they're liars.

I can't imagine how scandalized those critics who were relieved to have something that was mild enough to not excite their kids would've been if they'd stopped for a second and realized what was actually going on. The very first rule of Scooby-Doo, the single premise that sits at the heart of their adventures, is that the world is full of grown-ups who lie to kids, and that it's up to those kids to figure out what those lies are and call them on it, even if there are other adults who believe those lies with every fiber of their being. And the way that you win isn't through supernatural powers, or even through fighting. The way that you win is by doing the most dangerous thing that any person being lied to by someone in power can do: You think.

But it's not just that the crooks in Scooby-Doo are liars; nobody ever shows up to bilk someone out of their life savings by pretending to be a Nigerian prince or something. It's always phantasms and Frankensteins, and there's a very good reason for that. The bad guys in Scooby-Doo prey on superstition, because that's the one thing that an otherwise rational person doesn't really think through. It's based on belief, not evidence, which is a crucial element for the show. If, for example, someone knocks on your door and claims to be a police officer, you're going to want to see a badge because that's the tangible evidence that you've come to expect to prove their claim. If, however, you hold the belief that the old run-down theater has a phantom in the basement, then the existence of that phantom himself -- or at least a reasonably convincing costume -- is all the evidence that you need to believe that you were right all along. The bad guys are just reinforcing a belief that the other characters already have, and that they don't need any evidence before because it's based in superstition, not reason.