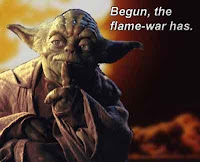 A few interesting developments in the Basko-Ditz LA Times autism story comment fracas (for those unfamiliar with the episode, you may want to see this post for a primer).

In the comments section of Harpocrates Speaks, the blog which responded to the Liz-Basko affair with a post entitled How Not to Make a Fool of Yourself on the Internet: A PSA, a commenter posted the following (alleged Twitter direct message transcript):

Here's a transcript of my bizarro conversation with Ms. Basko on Twitter. Notice how she never answers my question. I'm not sure if she simply does not understand my repeated question or is just dodging it. And for the record, I do have a son with autism and he receives SSI. I work three jobs so my wife can stay at home. That's why I found her comments so offensive and insisted that she answer my question (even though she didn't).
==

SB (Sue Basko): I am being stalked/harassed by a nut named @LizDitz who actually wrote the words being tweeted. Have reported to FBI.

ME: Since you have an account at LA Times blogs, FBI or LA Times should be able to determine if or who posted alleged comments.

SB: In the meantime, Liz Ditz and her "gravy train" words roll on. I have not been interviewed by her, never even heard of her!

ME: Not defending anybody but I only know about this because of you, not LD. Had to use Google to figure out what you were talking abt

SB: LD wrote words and tweeted them as mine - I have not had any interaction with her ever. She is cyberbully.

SB: It is on Google, but because she wrote it and put it there.

ME: Are you referring to her blog post or the quotes she attributed to you from the LA Times comments section of the Autism article?

ME: I'm referring to the fact that you have a registered account to add comments.

ME: latimesblogs.latimes.com/lanow/2011/10/… You're a "Top Commenter," though maybe you connected via Facebook...

ME: I'm selective about who I follow, that's why I'm asking.

ME: Liz has updated her blog and provides a screen shot of your comments to the LA Times blog article.

ME: My question still stands, did you write those words or not? (I'm referring to the comments attribute to you in the screenshot)

ME: I haven't repeated them. I'm just asking you if you made the comments she said you did. Yes or no?

SB: I do not even know what you are talking about - I have never had any interaction whatsoever with this woman!

ME: No one said you did. I'm doing what you asked, checking sources. DID YOU WRITE THOSE COMMENTS OR NOT? YES OR NO?

SB: THIS IS MY BLOG: occupypeace.blogspot.com CHECK YOUR SOURCES.

ME: Did you make the comments or not? Yes or no? Why can't you answer the question?

ME: I am checking sources, I'm asking you.

SB: I publish a blog by autistic man: paulmodrowski.blogspot.com I do not write LD's blog!

ME: OK, I give up. I've been asking specifically about comments you alledgely made on the LA TIMES blog. Is my question not clear?

ME: So did you write the comments (now deleted) that were allegedly (notice I use this word) on the LA Times blog? Yes or no?

ME: Look up definitions of cyber bullying, cyber stalking, as I don't think you know what they mean. Look up Streisand Effect too.

ME: You may also want to read up on how social media works. Good luck...


I cannot confirm or deny that the above Twitter conversation actually occurred, but it doesn't seem to be terribly unbelievable, based on the way Ms. Basko has reacted to the critique of her original LA Times comments. Again, she appears to avoid making any concessions regarding the original post on the LA Times piece, instead pointing elsewhere, saying, 'Hey, look over there!' when asked very direct questions about the comments.

The link points to a blog post entitled Liz Ditz Came Out of Hiding on Doug Copp's Blog. The post is from October of 2010, and makes plenty of painfully vague accusations against Ditz unrelated to the whole LA Times autism fracas. The post at Doug Copp's Blog is devoid of any supporting materials, links, or references -- simply a lot of angry remarks with no substance. It references ARTI, an organization which calls itself 'The World's most experienced rescue team and disaster management-mitigation organization.'

A Google search turned up some posts on Liz Ditz's blog about Doug Copp's disaster rescue and mitigation business. Her posts are well-documented, pointing to a number of credible sources which outline the sketchiness of Copp's business. Plenty of other sources had also reported on the dubious nature of Copp's enterprise, including CBS News, Snopes, the Jamaica Observer, and the Albuquerque Journal. Clearly, this is not a case of Ms. Ditz fabricating accusations out of thin air.

It appears Ms. Basko may have simply scoured the internet looking for any negative comments to support her declarations that Ditz is a 'cyberstalker' who attacks others on the internet.

Shortly after Basko left her comment on the def shepherd Facebook page, she left similar comments on the Harpocrates Speaks blog post, in which she quotes much of the post from Doug Copp's Blog: 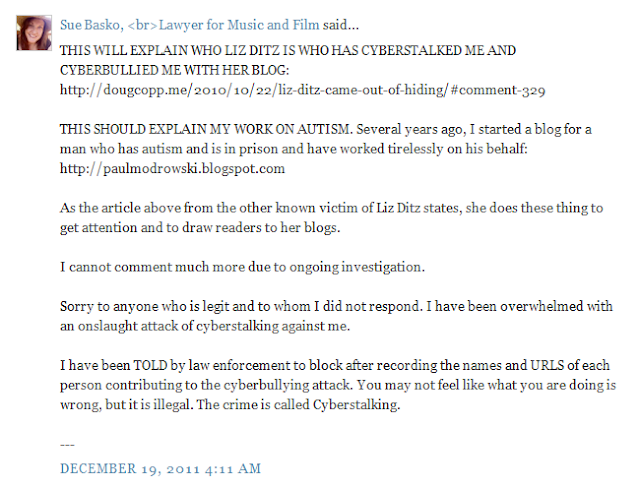 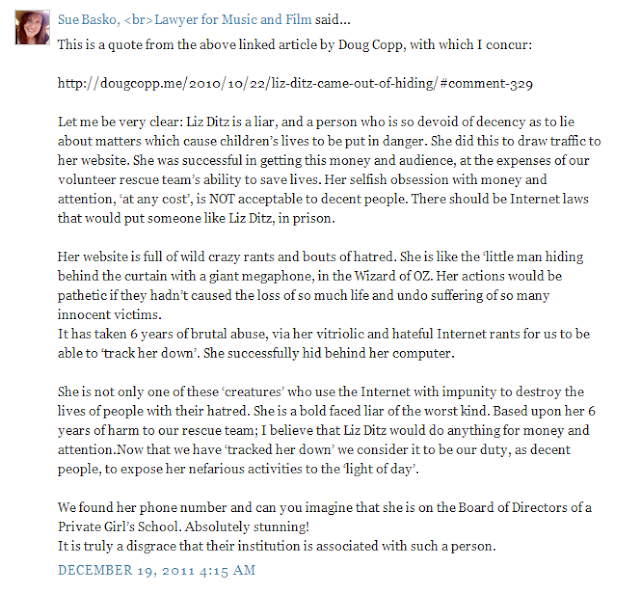 I'm sure we haven't heard the end of Ms. Basko. It's clear that she touched a nerve with the comments on the LA Times (which, it appears, she may be suggesting she never made). It's unclear if there actually is an investigation underway. Unless she knows something we don't know, there's very little likelihood that any law enforcement agency would get very far in an investigation before dismissing the whole incident as simply a case of someone with thin skin resorting to threats rather than answering her critics in the same venue that launched this whole incident to begin with.

Although I don't know much about Ms. Basko outside of her various internet posts related to this story, her Occupy blog, and the fact that she is an entertainment lawyer in LA, I do know that Liz Ditz is greatly admired for her autism work, and is the co-founder and editor of The Thinking Person's Guide to Autism, which has just been named 'Book of the Year' by Steve Silberman, senior writer for Wired and autism/neurodiversity blogger for the Public Library of Science.

Many would be quite surprised if Ditz were guilty of anything more than speaking up.