This morning, neuropsychologist Vaughan Bell tweeted a link to a most bizarre scientific paper.

"This is the weirdest forensic science paper I have ever read...and that's saying something," he wrote.

He's not lying. Not only is that 'saying something' (Bell's Twitter feed is a constant source of bizarro scientific links), but it is indeed a very weird forensic science paper.

The paper came out of the University Center of Legal Medicine, Lausanne-Geneva, Geneva, Switzerland, and is titled, The Modern holy shroud.


Testimonies disclosed that a 44-year-old pedestrian was struck head-on by a truck while she was roaming on the motorway; at the time of collision, the truck was travelling at a speed of about 90km/h. In the second phase of the collision, the pedestrian was projected about 100m before her body was run over by the truck and then by a car. The autopsy revealed extensive mutilations, making it impossible to verify the testimonies of witnesses to the collision as regards the pedestrian's position at the moment of the first impact. However, the reports produced by the technical expert and the forensic pathologist were able to confirm the testimonies, based on an impact zone on the front panel of the cab of the truck, where part of the pedestrian's face was reproduced like a "modern holy shroud".

And here's a picture of the front panel of the cab of that truck (Bell tweeted this image directly after his initial tweet). 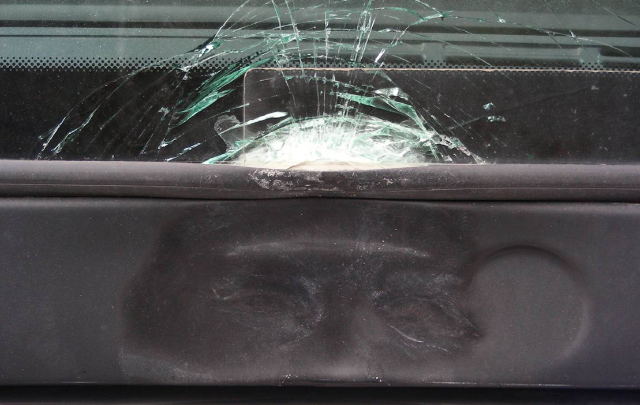