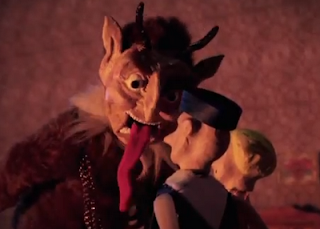 Thanks to the fine folks at Religion Dispatches, I was made aware of a mini-masterpiece of holiday entertainment that I would have never stumbled across otherwise. (I recently told Time Warner Cable to suck eggs.)

The Travel Channel's celebrity chef Anthony Bourdain had prepared a wonderful, stop-motion animation entitled 'A Krampus Carol,' as part of his holiday special. The segment, of course, is based on Krampus, the European legend of St. Nicholas' much feared henchman who handles the naughty list on the eve of St. Nicholas Day.

The segment is skillfully done in the style of the Rankin-Bass Christmas specials of the past.

Apparently, the segment was a little too much for the Travel Channel, who nixed Krampus in fear of terrifying the children, as Krampus has done for centuries.

Religion dispatches was keen to note a special appearance in the segment:


Perhaps accidentally, perhaps not, Bourdain’s Krampus Carol ends up capturing something important about the relation of folk beliefs to institutional doctrine. When Krampus raises his clawed fist to punish these poor cherubs, we see on the wall behind them (blink and you’ll miss it at 1:42) the smiling mug of none other than Pope Benedict XVI.

Just a random jab at Christendom and its discontents? Maybe. But Benedict is there because these claymation kinder are his kin. When he was just a Bavarian boy called Joseph Ratzinger, the Pope knew Krampus well—perhaps too well.

In fact, the Pope once told a Krampus carol of his own, in a video message to the people of Tittmoning, the small town near the Austrian border where he lived from the ages of two to five. In his memoirs, Benedict calls Tittmoning his “land of dreams,” and his holiday memories do begin with warm glow of a reverie:

“Before Christmas we walked through the hallways of the kindergarten and rehearsed to sing,” the Pope recalled. “And then we beheld in the hall where the Christmas tree stood. It remains for me truly a dream, reaching to the ceiling and on top bending over a little more.”

Soon Saint Nikolaus would arrive, dressed in gold brocade vestments that made the future pope “completely sure that all the other Nikolauses were fake, but that this was the real one, the only real one.”

What happy memories for the boy who would be pope! But then Benedict’s dreamy Alpine Christmas took a darker turn. At the end of the hall, he remembered, “two sisters held the doors closed, so that Krampus, who raved frightfully outside, would not come in.”

Part of the kindergarten’s Christmas celebration, he explained, was the reading aloud of all the naughty things the children had done that year, a catalogue of the transgressions of preschoolers. As a teacher moved through the list, the doors would bang and shake, and the two nuns charged with guarding them would pretend that they could hardly keep the doors closed, so vile were the children’s sins, so great was the wrath of Krampus.

“That was much scarier than if he were there,” Benedict said, “because what you only imagine, what has not yet happened, is much more dangerous than what you can actually see.”