Seagate Community Chapel in Wilmington, NC is feeling the heat after news reports and photos of their sign circulated online. 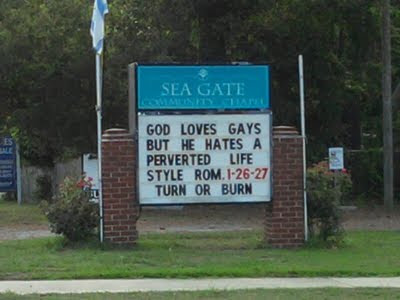 The sign maker, Anna Benson, told local news channel WECT that she "loves the gays." She states that her signs are always straight from the Bible, and the pastor stands by any message she posts, as long as it's biblically accurate.

"We're going to teach the entire truth," said Heuring, "and I'll take the heat for it."

Feel free to contact the church and give them some heat:

Here's a map for those of you in the Wilmington area who might like to attend services this Sunday.


UPDATE: The anti-gay sign at Seagate Community Chapel was vandalized Sunday afternoon. According to WECT:

Witnesses tell police a tall man took a hammer to the sign before leaving in a silver Ford Taurus. The car is reported to have bumper damage and a missing hubcap from the front left tire.

This happened after police broke up a peaceful protest held outside the church.

Wilmington Pride protested the sign's message Sunday morning. The organization supports homosexuals in the community. A member of the group wrote that the church's message "supports hate of homosexuality".

Pictures of Presidents With Teleprompters

I just heard Jon Huntsman on CNN making some Obama/teleprompter comment. The whole teleprompter jab has been dumb from the beginning. 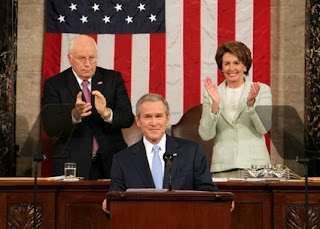 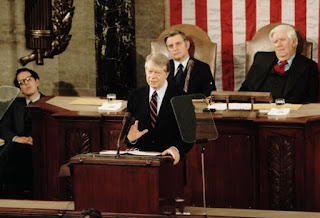 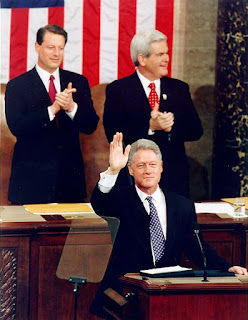 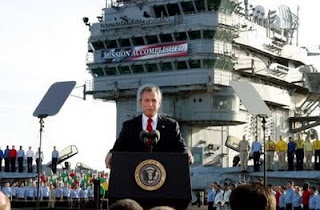 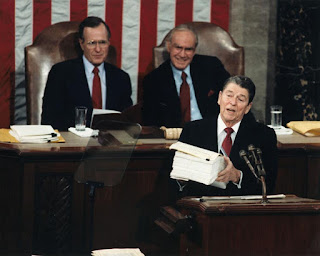 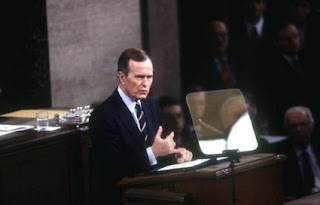 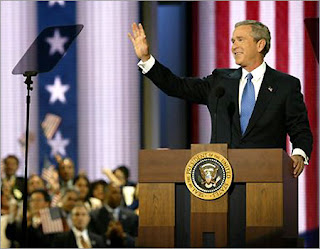 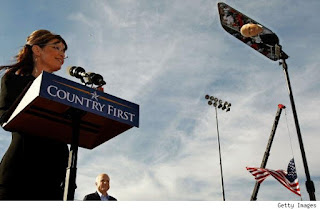 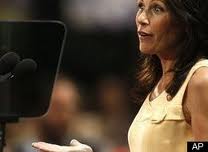 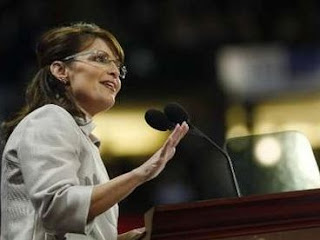 If I were a public speaker, I'd want a teleprompter. I bet you would too.

The next person who uses the teleprompter meme should be banned from using a teleprompter. Forever.
Posted by eshep on 8/10/2011 6 comments:

Email ThisBlogThis!Share to TwitterShare to FacebookShare to Pinterest
Tags: teleprompters

Colbert's 'Americans For A Better Tomorrow, Tomorrow' Super PAC has released their first ad in Iowa, just in time for the Ames Straw Poll.

Don't forget, Nation. Write in Rick Parry. With an A.

A Dutch vicar is making waves for his views on Christianity.

The Reverend Klaas Hendrikse is quoted by the BBC as saying the following:

"Make the most of life on earth, because it will probably be the only one you get."

"Personally I have no talent for believing in life after death," Mr Hendrikse says. "No, for me our life, our task, is before death."

"God is not a being at all... it's a word for experience, or human experience."

"You don't have to believe that Jesus was physically resurrected."

Hendrikse is not the leader of a Humanist or UU congregation. He presides over the Sunday service at Exodus Church in Gorinchem, central Holland. The church is part of the mainstream Protestant Church in the Netherlands. The service is conventional enough -- hymns, readings from the Bible, the Lord's Prayer, etc. But Hendrikse's sermons are what sets the service apart from conventional church.

Hendrikse appears to be tapping into a growing need for churches to address the doubt that has increased in congregations as more and more people are unable to reconcile scripture with what they know about the world.


Mr Hendrikse describes the Bible's account of Jesus's life as a mythological story about a man who may never have existed, even if it is a valuable source of wisdom about how to lead a good life.

His book 'Believing in a Non-Existent God' led to calls from more traditionalist Christians for him to be removed. However, a special church meeting decided his views were too widely shared among church thinkers for him to be singled out.

A study by the Free University of Amsterdam found that one-in-six clergy in the PKN and six other smaller denominations was either agnostic or atheist.

Reactions to the church's loose reading of the Christian doctrine has led to both jeers and cheers:

"When we get people into the Church by throwing Jesus Christ out of the Church, then we lose the core of Christianity. Then we are not reforming the institutions and attitudes but the core of our message."

Dienie van Wijngaarden, who's been going to Exodus Church for 20 years, is among lay people attracted to such free thinking.

Some believe that traditional Christianity has too restrictive a notion of the nature of God
"I think it's very liberating. [Klaas Hendrikse] is using the Bible in a metaphorical way so I can bring it to my own way of thinking, my own way of doing."

Wim De Jong says, "Here you can believe what you want to think for yourself, what you really feel and believe is true."