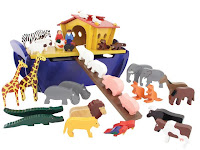 It's not the goofy depictions of the Ark, Ken. It's the goofiness of the story in light of our modern scientific understanding of the world.
Posted by eshep on 8/15/2012 3 comments: