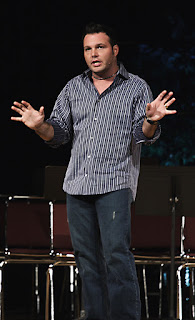 For those unfamiliar with Driscoll, he is not some fringe Fred Phelps-style of lunatic. Preaching Magazine named him one of the “25 Most Influential Pastors of the Past 25 Years.” He's 'hip' and 'youthful' and 'innovative.'

Driscoll is the founding pastor of Seattle-based Mars Hill Church, which was recently rated as the eighth most influential church in the United States, with approximately 7,500 attending services each week, and approximately 100,000 podcast downloads of each service.

The booklet contains many other gems, such as: