Is Religion Complicit In The Suicides of Gay Teens?

A recent post about the suicide of Jamie Hubley, a 17-year-old gay Ottawa teen, sparked a debate about the role of religion in anti-LGBT bullying.

I noted in the post that Jamie's funeral would be held at a Catholic church, and stated that "Jamie's family and friends will pay tribute to Jamie's life in an church institution which undoubtedly contributed to his death."

I realize that those were strong words, yet I stand by that statement.

Here are some startling statistics on LGBT bullying:


Statistics suggest that youth hear anti-gay remarks approximately 25 times in an average school day, or more specifically, once every 14 minutes.

The Gay, Lesbian, and Straight Education Network’s (GLSEN) school climate survey found that approximately 61% of LGBTQ youth reported feeling unsafe in their school environments and 44% reported being physically harassed due to their perceived sexual orientation. This unsafe sense is not just a feeling, because 1 in 6 LGBTQ youth will be physically assaulted so badly that medical attention is needed.

The 2006 Massachusetts Youth Risk Behavior Survey of over 3,500 participants indicates that LGBTQ students were more than twice as likely than their non-LGBTQ peers to attempt suicide.

I'm sure we can all agree. Anti-LGBT attitudes and bullying can be devastating, especially to teens, and often leads to isolation, physical and mental abuse, depression, and suicide.


Where Do Anti-LGBT Attitudes and Bullying Come From?

While it is true that bullying has occurred for as long as humans have been social beings, and that much of bullying is not directed at LGBT teens, the bullying that LGBT teens experience is something different altogether. While no bullying should be acceptable, the bullying of LGBT teens should be of great concern, due to the nature of the bullying and its devastating effects on our children. 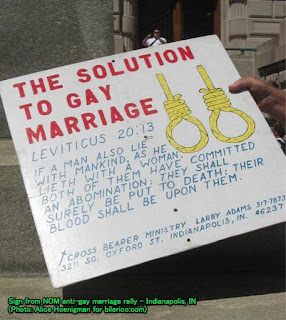 The religious component of bullying is especially damaging. When we say that bullying is simply a normal part of growing up, we fail to remember that Leviticus 20:13 does not state, "If a man plays the piano instead of football, he has done what is detestable. He must be put to death; His blood will be on their own heads."

The religious condemnation which informs the bullying of LGBT teens does more than hurt feelings, or cause a bruise. It is a visceral attack on the core of a child's being. It condemns. It eviscerates self worth and advocates a sentence of eternal damnation.

Via 'Faith in America':


We recognize that oppression is most often rooted in religious belief and ideologies of power in which women, people of color and non-gender conforming (lesbian, gay, bisexual, transgender, intersex and queer) people are subjugated and subjected to the violence of exclusion. You will find us most often in dialogue with religious leaders, denominations and institutions who discriminate in polity, policy or practice. We are committed to decriminalization of sexual minorities by all church and state sanctioned organizations worldwide.

While some might claim that the above organizations are biased, or working to advance the gay agenda, there is no shortage of respected Christian writers who also acknowledge that religion is complicit in LGBT teen suicides.


We very often find conservative Christians defending themselves against the accusation that the theology in which they believe–and specifically their belief that homosexuality is a sin against God—ultimately contributes to that which informs, motivates, and encourages the bullying of gay teens.


If you’re a Christian who believes that being gay is a morally reprehensible offense against God, then you share a mindset, worldview, and moral structure with the kids who hounded Jamey Rodemeyer, literally, to death. It is your ethos, your convictions, and your theology that informed, supported, and encouraged their cruelty. 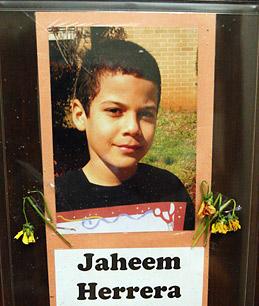 
Oh sure...we [Christians] have “softened” our approach, saying things like “hate the sin, love the sinner,” but we fail to recognize that what we are calling a “sin” and the person we are calling a “sinner” are one and the same. A person whose sexual orientation is homosexual, or bi-sexual, or queer can no more separate themselves from their sexuality than a heterosexual person can. It's like saying “hate the toppings, love the pizza.” It's just not the pizza without the toppings. We just aren't loving the person if we don't love the whole person.

I suspect the “softening” of the language we use has everything to do with making us feel better and very little with making LGBTQ folk feel better, because it certainly doesn't make them feel any better. As a matter of fact, the love/hate (emphasis on hate) relationship that the Church continues to push on this group of people only serves to push them into closets and into even darker places, which sometimes leads to suicide. The Church and its approach to this issue are at fault for most of the hurt, anguish, self-doubt, abuse and death associated with being LGBTQ. Not very loving. Not very grace filled. But it certainly leaves us in need of forgiveness.

A Call To Action

Religion is responsible for so much good in the world. Religious organizations help feed the poor, build homes for the homeless, provide aid to the sick, and raise money for many wonderful causes. It is also important to note that many religious folks reject religion-based bigotry, and fight for LGBT rights every day. Many churches openly welcome members of the LGBT community, and many are directly involved in organizing campaigns against anti-LGBT attitudes and legislation. 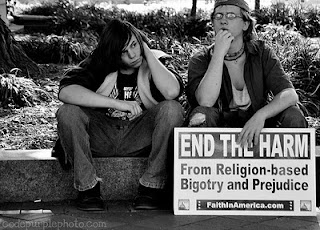 However, far too many sweep religion-based anti-LGBT ideology under the rug. We often fail to speak up and denounce religious leaders or organizations which use the pulpit to debase the LGBT community. We avoid confronting the fact that we bury our gay teens in the cemeteries of churches which perpetuate the attitudes that lead to the deaths of more teens.

The least we can do for the teenagers who have taken their lives, and for those who might be on a similar path, is to rethink our association with institutions whose ideologies are at odds with our own. We need to speak up and demand that these religious organizations and leaders re-evaluate their attitudes on homosexuality.

We need to evolve to the point that we do not take scripture literally. I would like to see us reach a point when we, as human beings with evolved minds and the capacity for empathy, reject the dogma that we see as harmful and archaic. We have done this with so much of scripture, yet we hang on to the Bible's archaic and obsolete take on the nature of sexual orientation and gender.

We are capable of rejecting the Bible's treatment of women (e.g. 1 Corinthians 14:34-35, 1 Timothy 2:11-15), or advice on disciplining children (e.g. Proverbs 22:15, Deuteronomy 21:18-21). We have let go of the Bible's examples of keeping slaves, polygamy, or the killing of others with different religions. Yet, so many seem incapable of doing the same with regard to homosexuality, an orientation determined by a combination of genetic, hormonal, environmental, and biological factors, and which is not a choice. Why would we choose to condemn, discredit, and belittle these folks based on cherry-picked instructions from the Bible, while dismissing other scripture which makes no sense to us in modern society?


Morality Evolved, And Continues To Evolve

The precursors of human morality can be traced to the behaviors of many other social animals. Our morality predates scripture. It predates the concept of God.  As evolved human beings with the capacity for determining what is morally right and wrong, we owe it to ourselves, and to humanity, to allow ourselves to point out flawed morality when we find it, regardless of its source. 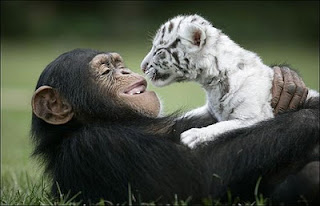 We are fully capable of determining what does and doesn't cause suffering in others. Morality is one of our most basic instincts. We shouldn't be afraid to use it. We must question religious dogma which asks us to go contribute to the suffering of other human beings. Most humans reject stoning, slavery, and human sacrifice -- all smiled upon by God somewhere in the Bible. We have moved beyond such barbarism, because our morality has evolved since biblical times.

Human beings and human morality continue to evolve. Why postpone our progress?

Why on earth would we resist a path that guarantees less suffering and more happiness for our fellow humans?