"Do you know why the Indian rain dances always worked? Because the Indians would keep dancing until it rained." — Sherman Alexie 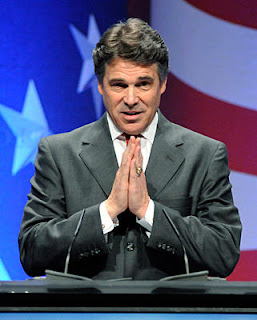 And if you thought the prayers just started today, you're wrong. The Houston Chronicle reported the following:


Just as each of the seats at Reliant Stadium were blessed before the event, a team of 400 intercessors are praying on the event’s behalf today. They are asking God to keep the crowd safe, keep the event peaceful and allow the technology and sound system to function properly during the seven-hour prayer and praise gathering.

They are also focused on the message of the event, that hearts may be transformed, that people may grow closer to God and that the gathering itself be pleasing to God, said Rick Torrison, the pastor coordinating the team, which meets in a room in Reliant.

Outside the stadium, the church body across the globe has joined in prayer. They have 2 million prayer intercessors continuously praying for The Response in the country of Indonesia alone, plus more in India, Brazil and underground churches internationally, he said.

They have had 500 people across the country fasting a day at a time for 40 days leading up today’s gathering, and 1,500 venues in the U.S. are streaming the event.

Today's event promised to be a Lollapalooza of batshit right-wing Christian rantings, given the roster of participants, a veritable who's who of bigots, certified hate group members, white supremacists, doomsayers, and religious exceptionalists. However, it appears that Perry and Co. decided to ensure that the event remained somewhat non-controversial.  He will be running for president, after all.

There was not a lot of the blatant insanity that we have come to expect from these folks. In fact, most of the event was neutered of bilious statements. That does not mean that The Response was not a misguided, political, and exclusionary event. It does not mean that the things that were said were not alarming. There was plenty of exceptionalism, bigotry, doomsaying, and blatant disregard for the constitution.

Below are a few today's highlights.  More will come, as I sort through it all.

Luis Cataldo, of the International House of Prayer in Kansas City, made it clear from the get-go that this was not a non-denominational event. It's pretty clear who is, and who is not, welcome at The Response (no surprise here):

We are responding today because of one name. We are gathered in this stadium to bring blessing, honor and glory to Jesus. No other name! Just the name of Jesus!

Ringmaster Rick Perry reminded us that God's agenda is not a political agenda, but doesn't seem to capable of following God's lead.

Only thing we love more than this country is the living Christ! He didn’t leave us to live a life in our sins, but paid the price for them. He who knew no sin, he gave his life as ransom for me...His agenda is not a political agenda, his agenda is a salvation agenda.

Father our heart breaks for America. We see discord at home. We see fear in the marketplace. We see anger in the halls of government, and as a nation, we have forgotten who made us, who protects us, blesses us and for that we cry out for your forgiveness.

Gov. Brownback seemed to be making apologies for the event itself, as well as its many contributors:

Loving God, forgive us our many sins, for being judgmental, unloving, focused on ourselves, lacking in mercy, hypocritical. By your grace, let us be the salt and life of the loving God.

During a generational blessing, James Dobson lamented the environment that the current generation has been subjected to, while Vonette Bright prayed that public schools would soon see the return of prayer and the Ten Commandments.

Dobson also compared problems facing the U.S. to World War II’s Battle of Dunkirk: “We are desperately in need of our own miracle,” Dobson said. “Our nation is surrounded by forces we don’t control and problems that none of our leaders can solve."

Certifiable nutjob John Hagee used his prayer time to remind God that we are still a Christian nation, and to ask Jesus to take the wheel.

IHOP's Mike Bickle, who believes that Oprah is a forerunner to the Antichrist, used his time to rail against the gays and their allies, who are "redefining love" against the teaching of the Bible. He also reconfirmed the non-denominational nature of the event by stating, "There is no other God besides Jesus."

It ain't a religious right party until the anti-choice folks show up. The above anti-choice activists prayed for "repentance for the shedding of innocent blood," and the end of abortion in America.


And finally, the fine folks at Right Wing Watch have put together a short video compilation featuring all your favorite moments from the day.

Ann Coulter Would Like All Gays Back In The Closet

Ann Coulter breaks some kind of record here for the highest number of bigoted, backward comments in one interview segment.