1. He goes jogging in the morning packing a Ruger .380 with laser sights and loaded with hollow point bullets.

2. He wears a pair of cowboy boots emblazoned with the words "Freedom" and "Liberty."

3. He believes the economic crisis is happening for a purpose; so that the nation will return to biblical principles and free us from our slavery to the government.

4. As the gulf oil spill, which Perry stated was an "act of God," entered its third month, he issued a proclamation calling on his constituents to pray to "ask [God] for his merciful intervention...in this time of crisis." Dear God, please stop the leak that you started. Amen.

5. He stated,  "Homosexuality is about sex. Do you agree?...Well, then why don’t they call it something else?" apparently forgetting that heterosexuality also contains 'sex,' and that in both cases 'sex' is referring to gender, and not 'doing it.'

7. He stated that Intelligent Design was a "valid scientific theory."

8. In April, as Texas fought several wildfires, Perry issued a proclamation for a 3-day "Prayer For Rain." As Native American writer Sherman Alexie said, "Do you know why the Indian rain dances always worked? Because the Indians would keep dancing until it rained."

9. His 'Response' prayer rally, which he describes as "a non-denominational, apolitical Christian prayer meeting," is powered by politically active Religious Right individuals and groups who are hell-bent on injecting their extremist religious views, including degrading views of non-Christians and the LGBT population, into American politics. 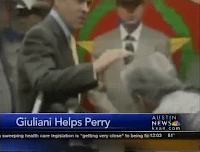