Remember the story of the dog who was sentenced to death by stoning by rabbis in Jerusalem?

Untrue, according to the Beth Din financial court. 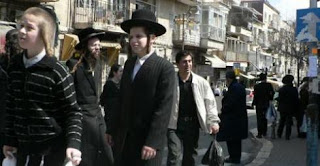 “There is no basis for stoning dogs or any other animal in the Jewish religion, not since the days of the Temple or Abraham.

“The female dog found a seat in the corner of the court. And the children were delighted by it; there were hundreds outside the court. They are used to seeing stray cats but most have never seen a dog before. The only action we took was to dial the number of the Jerusalem Municipality to get the people in charge to take it away.

“There was no talk of reincarnation, a lawyer has never been mentioned, either now or 20 years ago, and there was no stoning. Such inventions are a kind of blood libel, and we wonder why the inventor of the story did not continue to describe how we collected the blood of the dog to make our matzah.”

It's unclear how the original story came to be, but when it was picked up by news sources, it quickly enraged people around the globe, becoming one of the BBC's 'Most Read' items, and generating nearly 2,000 comments on Yahoo! News.
Posted by eshep on 6/21/2011