Miss USA: Some Worry Evolution Questions Cause Anxiety and Compromise

The Christian Post has a piece about the controversy over asking Miss USA pageant contestants controversial questions, including those about evolution. 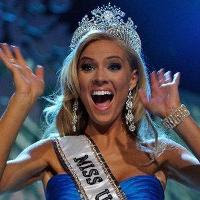 Agents and pageant directors believe that forcing contestants to answer questions about controversial topics, such as evolution, causes undue anxiety and intimidation.

Past contestants, however, haven't been particularly shy about their views on evolution:


While many contestants expressed an openness to include evolution in public schools, one contestant – Miss Kentucky Kia Ben-et Hampton – said that evolution should not be taught, alluding to the differing opinions expressed in the scientific and religious communities.

A few other contestants including Miss Nebraska Haley Jo Herold, Miss Alaska Jessica Chuckran and Miss New Hampshire LacyJane Folger answered affirmatively, but expressed their desire to see the other side – such as creationism – given equal time in the classroom.

Chuckran said in her answer,  "I think it's necessary that evolution is taught in schools ... However, personally, I do not believe in evolution. I believe that each one of us were (sic) created for a purpose by God and that just gives my life so much more direction and meaning."

Miss North Carolina Brittany York responded,  "I think it's great to get both sides of the story. I'm personally a Christian so I believe the Bible's version but you can't push opinions or beliefs on children so they need to know every side that's out there. So yes, I do believe that (evolution) should be taught but so should the other side of the story."

If there were ever a perfect vehicle for showcasing the ridiculousness of evolution-denial, it's the Miss USA pageant. We learned so much about maps from Miss Teen South Carolina in 2007. Sarah Palin, with her creative interpretation of the Paul Revere ride, appears to still have quite a bit of pageant blood running through her veins.

The concept of creationism, or Intelligent Design, is also a product of indoctrination. If a child were to grow up without hearing the fantastical stories of a 7-day creation of the earth, a man and woman forged from mud and bone, and a global flood, there would be no point in their lives in which it would be necessary, or wise, to accept those stories as true.  There are no credible universities that do not teach evolution as the bedrock of modern biology. There are no credible universities that teach creationism, or Intelligent Design as a plausible theory. And after all, evolution is only a theory. Like gravity. Not that many of these creationist beauty pageant contestants are pursuing a career in the life sciences -- good luck to those who are.

So, I say, let the contestants continue to wax philosophical on the topic of evolution. It's hilarious.

"Ridicule is the only weapon which can be used against unintelligible propositions." - Thomas Jefferson
Posted by eshep on 6/19/2011