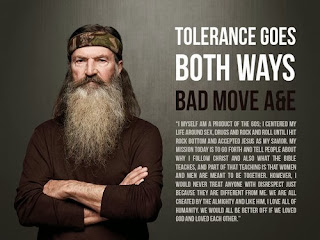 There is nothing about tolerance that requires someone to tolerate the mistreatment or maligning of other human beings because of their natural traits. So crying foul on this one and saying it's an attack on faith and family values is to miss the point. Because anti-LGBT sentiment is not a value. Any faith that dictates that it is, is morally flawed. Acquiescing to such ideology is not a virtue.

So this whole Duck Dynasty/A&E﻿ thing. I've been seeing a lot of comments in the blogosphere/Twittersphere, and petitions being passed around on Facebook, and one thing seems clear: Too many Americans have no idea what the First Amendment does and doesn't do.

Robertson has all the rights in the world to believe and say what he wants about LGBT folks. Nobody can take that right away from him. However, his employer, A&E, has no obligation whatsoever to pay him for making comments which they feel are not aligned with their values. They are in no way compelled to continue to provide a forum for a guy who has offended a significant number of their viewers.

I imagine if an employee of Fox News (or any other network) made comments on or off the air that equated Christians with swine, that individual would be suspended. And I imagine that the same people who are backing Robertson and boycotting A&E, would applaud the suspension of this employee.  And if he were to remain, I assume they would boycott the Network. 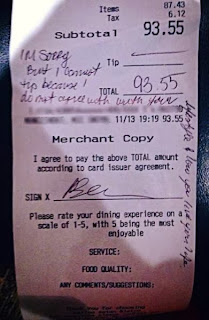 8. Maybe gratuities are for services rendered and not for the display of specific human traits?

MONSTERS OF THE COSMOS - Symphony of Science