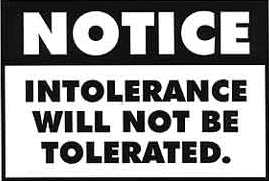 November 16 is International Day of Tolerance.

The UN General Assembly invited UN Member States to hold the day for observance, with the goal of advancing "human welfare, freedom and progress everywhere, as well as to encourage tolerance, respect, dialogue and cooperation among different cultures, civilizations and peoples."

I once stumbled across the UN's Declaration on Principles on Tolerance. It's probably as fine a document as you will find on the subject.

Many of us have certainly run into a scenario in which we have been called 'intolerant' for denouncing the beliefs of others. If one is self-aware, such an accusation does not fall on deaf ears. Progressives are often pointing out the hypocrisy in others as a means of highlighting the need for reflection or reform. It would make sense that accusations of hypocrisy and intolerance would give pause to one who is combating intolerance.

The UN's declaration addresses this issue, and does a great job of explaining that tolerance does not require that one be tolerant of social injustice. This is where the rubber meets the road.

When we denounce beliefs which cause harm to others, we are in no way in conflict with the concept of tolerance. Tolerance, in part, is "the responsibility that upholds human rights, pluralism (including cultural pluralism), democracy and the rule of law. It involves the rejection of dogmatism and absolutism and affirms the standards set out in international human rights instruments...The practice of tolerance does not mean toleration of social injustice or the abandonment or weakening of one's convictions."

It wouldn't hurt us to give more attention to this day. There sure seems to be a lot of confusion as to what tolerance really means.

Here is the UN declaration:

Declaration of Principles on Tolerance

Proclaimed and signed by the Member States of UNESCO on 16 November 1995.
Preamble

Bearing in mind that the United Nations Charter states: 'We, the peoples of the United Nations determined to save succeeding generations from the scourge of war, ... to reaffirm faith in fundamental human rights, in the dignity and worth of the human person, ... and for these ends to practise tolerance and live together in peace with one another as good neighbours',

Recalling that the Preamble to the Constitution of UNESCO, adopted on 16 November 1945, states that "peace, if it is not to fail, must be founded on the intellectual and moral solidarity of mankind",

Recalling also that the Universal Declaration of Human Rights affirms that "Everyone has the right to freedom of thought, conscience and religion" (Article 18), "of opinion and expression" (Article 19), and that education "should promote understanding, tolerance and friendship among all nations, racial or religious groups" (Article 26),


Bearing in mind the objectives of the Third Decade to Combat Racism and Racial Discrimination, the World Decade for Human Rights Education, and the International Decade of the World's Indigenous People,

Alarmed by the current rise in acts of intolerance, violence, terrorism, xenophobia, aggressive nationalism, racism, anti-Semitism, exclusion, marginalization and discrimination directed against national, ethnic, religious and linguistic minorities, refugees, migrant workers, immigrants and vulnerable groups within societies, as well as acts of violence and intimidation committed against individuals exercising their freedom of opinion and expression - all of which threaten the consolidation of peace and democracy, both nationally and internationally, and are obstacles to development,

Emphasizing the responsibilities of Member States to develop and encourage respect for human rights and fundamental freedoms for all, without distinction as to race, gender, language, national origin, religion or disability, and to combat intolerance,


Adopt and solemnly proclaim this Declaration of Principles on Tolerance

Resolving to take all positive measures necessary to promote tolerance in our societies, because tolerance is not only a cherished principle, but also a necessity for peace and for the economic and social advancement of all peoples,

We declare the following:

1.1 Tolerance is respect, acceptance and appreciation of the rich diversity of our world's cultures, our forms of expression and ways of being human. It is fostered by knowledge, openness, communication, and freedom of thought, conscience and belief. Tolerance is harmony in difference. It is not only a moral duty, it is also a political and legal requirement. Tolerance, the virtue that makes peace possible, contributes to the replacement of the culture of war by a culture of peace.

1.2 Tolerance is not concession, condescension or indulgence. Tolerance is, above all, an active attitude prompted by recognition of the universal human rights and fundamental freedoms of others. In no circumstance can it be used to justify infringements of these fundamental values. Tolerance is to be exercised by individuals, groups and States.

1.3 Tolerance is the responsibility that upholds human rights, pluralism (including cultural pluralism), democracy and the rule of law. It involves the rejection of dogmatism and absolutism and affirms the standards set out in international human rights instruments.

1.4 Consistent with respect for human rights, the practice of tolerance does not mean toleration of social injustice or the abandonment or weakening of one's convictions. It means that one is free to adhere to one's own convictions and accepts that others adhere to theirs. It means accepting the fact that human beings, naturally diverse in their appearance, situation, speech, behaviour and values, have the right to live in peace and to be as they are. It also means that one's views are not to be imposed on others.

2.1 Tolerance at the State level requires just and impartial legislation, law enforcement and judicial and administrative process. It also requires that economic and social opportunities be made available to each person without any discrimination. Exclusion and marginalization can lead to frustration, hostility and fanaticism.

2.2 In order to achieve a more tolerant society, States should ratify existing international human rights conventions, and draft new legislation where necessary to ensure equality of treatment and of opportunity for all groups and individuals in society.

2.3 It is essential for international harmony that individuals, communities and nations accept and respect the multicultural character of the human family. Without tolerance there can be no peace, and without peace there can be no development or democracy.

2.4 Intolerance may take the form of marginalization of vulnerable groups and their exclusion from social and political participation, as well as violence and discrimination against them. As confirmed in the Declaration on Race and Racial Prejudice, "All individuals and groups have the right to be different" (Article 1.2).

3.1 In the modern world, tolerance is more essential than ever before. It is an age marked by the globalization of the economy and by rapidly increasing mobility, communication, integration and interdependence, large-scale migrations and displacement of populations, urbanization and changing social patterns. Since every part of the world is characterized by diversity, escalating intolerance and strife potentially menaces every region. It is not confined to any country, but is a global threat.

3.2 Tolerance is necessary between individuals and at the family and community levels. Tolerance promotion and the shaping of attitudes of openness, mutual listening and solidarity should take place in schools and universities and through non-formal education, at home and in the workplace. The communication media are in a position to play a constructive role in facilitating free and open dialogue and discussion, disseminating the values of tolerance, and highlighting the dangers of indifference towards the rise in intolerant groups and ideologies.

3.3 As affirmed by the UNESCO Declaration on Race and Racial Prejudice, measures must be taken to ensure equality in dignity and rights for individuals and groups wherever necessary. In this respect, particular attention should be paid to vulnerable groups which are socially or economically disadvantaged so as to afford them the protection of the laws and social measures in force, in particular with regard to housing, employment and health, to respect the authenticity of their culture and values, and to facilitate their social and occupational advancement and integration, especially through education.

3.4 Appropriate scientific studies and networking should be undertaken to co-ordinate the international community's response to this global challenge, including analysis by the social sciences of root causes and effective countermeasures, as well as research and monitoring in support of policy-making and standard-setting action by Member States.

4.1 Education is the most effective means of preventing intolerance. The first step in tolerance education is to teach people what their shared rights and freedoms are, so that they may be respected, and to promote the will to protect those of others.

4.2 Education for tolerance should be considered an urgent imperative; that is why it is necessary to promote systematic and rational tolerance teaching methods that will address the cultural, social, economic, political and religious sources of intolerance - major roots of violence and exclusion. Education policies and programmes should contribute to development of understanding, solidarity and tolerance among individuals as well as among ethnic, social, cultural, religious and linguistic groups and nations.

4.3 Education for tolerance should aim at countering influences that lead to fear and exclusion of others, and should help young people to develop capacities for independent judgement, critical thinking and ethical reasoning.

4.4 We pledge to support and implement programmes of social science research and education for tolerance, human rights and non-violence. This means devoting special attention to improving teacher training, curricula, the content of textbooks and lessons, and other educational materials including new educational technologies, with a view to educating caring and responsible citizens open to other cultures, able to appreciate the value of freedom, respectful of human dignity and differences, and able to prevent conflicts or resolve them by non-violent means.

We commit ourselves to promoting tolerance and non-violence through programmes and institutions in the fields of education, science, culture and communication.

In order to generate public awareness, emphasize the dangers of intolerance and react with renewed commitment and action in support of tolerance promotion and education, we solemnly proclaim 16 November the annual International Day for Tolerance.