In the following video, taken from a debate with apologist William Craig, Sam Harris offers a thought-provoking view of religion from the perspective of circumstance. It's something that I have thought about often. 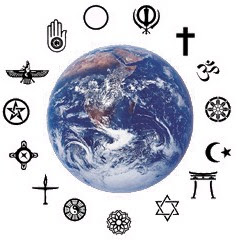 So many of us believe that our religion is true. We believe this with so much certainty that we don't hesitate to characterize other belief systems as incorrect.

A great majority of us are born into a religion. We are indoctrinated into our religions, whether we want to admit it or not. If we had somehow been born to a different family across the globe, in another culture, we would very likely have been indoctrinated into a completely different religion -- one which we would feel to be the one true religion. All other religions, including the one in that alternative scenario, would be false.

Beyond childhood, the religions that we are born into are further reinforced through worship and the reading of scripture. Each of us are further assured that our religions are true, because each of our holy books commands us to believe that they are true.

How are we to reconcile this? Many argue that, if a religion is true, it will find its way to us no matter where we are. We need to remember, that billions of people believe the exact same thing.

Although Harris does not delve into it, I have often extrapolated, considering the probability of Darwinian life elsewhere in the cosmos, that there are unlimited religions currently in existence -- not to mention those discarded, or yet to be conceived.