If I didn't know any better, I would suspect that The American Family Association's Bryan Fischer is an invention -- brilliant comedy-slash-performance art for the ages, joining the ranks of Tony Clifton and Neil Hamburger.

His anti-LGBT, xenophobic, extreme Christian Right views are so ridiculously over the top, you'd be crazy not to wonder if he's simply an elaborate hoax.

If his extreme ideology wasn't enough, Fischer also lacks any hint of self-awareness, spouting blatant hypocrisy at every turn.

Take his recent post at World Nut Daily, in which he doubles down on his belief that Muslims have no place in the US military.


To my knowledge, I was the first voice in America to call for stopping the practice of Muslims serving in the U.S. military. I did so the day after the Fort Hood shootings in November of 2009.

I endured a withering firestorm of criticism from friend and foe alike, and was summoned to both CNN and the Alan Colmes radio show to explain myself.

Now a prominent Tennessee legislator, Rep. Rick Womick, is joining me in this call. Said he, at a Sharia-awareness-event over the weekend, "If you believe it (the Quran), you are commanded to kill anybody who will not convert to Islam."

And of course he is right about what the Quran teaches the followers of Muhammad and Allah. There are 109 verses in the Quran, by one count, that call for violence against infidel Christians and Jews. One example will suffice: "Slay the idolaters wherever you find them. Arrest them, besiege them, and lie in ambush everywhere for them" (Sura 9:5).

What part of "slay the idolaters wherever you find them" do brain-addled idolaters not understand? Muslims have been ordered by their god to kill you! What about that do you not get?


Arresting, besieging and lying in ambush is exactly the kind of thing the United States military does to our enemies. Who are Muslims obligated to do that to? Who are the enemies of Islam that devout Muslims are ordered to arrest, besiege and ambush? Why, their fellow soldiers who believe in the God of Christianity.

It would be one thing if this ideology were covert and we were just finding out about it. But it's right there in their holy book where it has been for 1,400 years, where everybody, including our next commander in chief, can read it. It is sheer lunacy not to take this seriously.

In fact, I would suggest that I am showing more honor to Muslims than anyone else, because I am taking their religion more seriously than they are. I believe what Allah said through his Prophet, peace be upon him, that his followers have a sacred duty to slay infidel Americans. It shows a shameless lack of respect for Islam not to believe what their holy book says about their own religion. I have too much respect for Muslims and their sincerity and devotion to make that mistake.

If Fischer wishes to ban all adherents of one religion based on the barbarism of its holy book, and the actions of some of its most extreme followers, then he might want to just call for a ban of Christians and Jews as well.

In a comparison of the Quran and the Bible for NPR, religion historian Philip Jenkins stated:


"Much to my surprise, the Islamic scriptures in the Quran were actually far less bloody and less violent than those in the Bible," Jenkins says.

"By the standards of the time, which is the 7th century A.D., the laws of war that are laid down by the Quran are actually reasonably humane," he says. "Then we turn to the Bible, and we actually find something that is for many people a real surprise. There is a specific kind of warfare laid down in the Bible which we can only call genocide."

It is called herem, and it means total annihilation. Consider the Book of 1 Samuel, when God instructs King Saul to attack the Amalekites: "And utterly destroy all that they have, and do not spare them," God says through the prophet Samuel. "But kill both man and woman, infant and nursing child, ox and sheep, camel and donkey."

When Saul failed to do that, God took away his kingdom.

"In other words," Jenkins says, "Saul has committed a dreadful sin by failing to complete genocide. And that passage echoes through Christian history. It is often used, for example, in American stories of the confrontation with Indians — not just is it legitimate to kill Indians, but you are violating God's law if you do not."

Jenkins notes that the history of Christianity is strewn with herem. During the Crusades in the Middle Ages, the Catholic popes declared the Muslims Amalekites. In the great religious wars in the 16th, 17th and 19th centuries, Protestants and Catholics each believed the other side were the Amalekites and should be utterly destroyed. 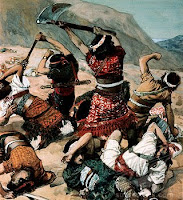 Let's have a look at some of the passages from Fischer's Bible:


If there be found among you, within any of thy gates which the LORD thy God giveth thee, man or woman, that hath wrought wickedness in the sight of the LORD thy God, in transgressing his covenant; And hath gone and served other gods, and worshipped them, either the sun, or moon, or any of the host of heaven, which I have not commanded; And it be told thee, and thou hast heard of it, and enquired diligently, and, behold, it be true, and the thing certain, that such abomination is wrought in Israel; Then shalt thou bring forth that man or that woman, which have committed that wicked thing, unto thy gates, even that man or that woman, and shalt stone them with stones, till they die. (Deuteronomy 17:2-5)

If thy brother, the son of thy mother, or thy son, or thy daughter, or the wife of thy bosom, or thy friend, which is as thine own soul, entice thee secretly, saying, Let us go and serve other gods, which thou hast not known, thou, nor thy fathers; Namely, of the gods of the people which are round about you, nigh unto thee, or far off from thee, from the one end of the earth even unto the other end of the earth; Thou shalt not consent unto him, nor hearken unto him; neither shall thine eye pity him, neither shalt thou spare, neither shalt thou conceal him: But thou shalt surely kill him; thine hand shall be first upon him to put him to death, and afterwards the hand of all the people. And thou shalt stone him with stones, that he die; because he hath sought to thrust thee away from the LORD thy God, which brought thee out of the land of Egypt, from the house of bondage. And all Israel shall hear, and fear, and shall do no more any such wickedness as this is among you. (Deuteronomy 13:6)

Now go and smite Amalek, and utterly destroy all that they have, and spare them not; but slay both man and woman, infant and suckling, ox and sheep, camel and ass. (1 Samuel 15)

Surely, Fischer would be the first to state that the above passages are out of context, relate to a particular time and place in human history, and don't represent modern Christianity.

Most Muslims would say the same thing about the passages Fischer has cherry-picked from the Quran.


Violence in the Quran, [Jenkins] and others say, is largely a defense against attack.

"By the standards of the time, which is the 7th century A.D., the laws of war that are laid down by the Quran are actually reasonably humane," he says.

And certainly, Fischer has a point when he points to some of the sensational stories of Islamic-fueled violence in recent times. We also must understand that these acts are a whole other animal, and most modern Muslims are far less extreme in their religious views than is Fischer.


That may be the popular notion of jihad, says Waleed El-Ansary, but it's the wrong one. El-Ansary, who teaches Islamic studies at the University of South Carolina, says the Quran explicitly condemns religious aggression and the killing of civilians. And it makes the distinction between jihad — legal warfare with the proper rules of engagement — and irjaf, or terrorism.

"All of those types of incidences — [Sept. 11], Maj. Nidal Hasan and so forth — those are all examples of irjaf, not jihad," he says. According to the Quran, he says, those who practice irjaf "are going to hell."

So what's going on here? After all, we all have images of Muslim radicals flying planes into buildings, shooting up soldiers at Fort Hood, trying to detonate a bomb on an airplane on Christmas Day. How to reconcile a peaceful Quran with these violent acts?

El-Ansary says that in the past 30 years, there's been a perfect storm that has created a violent strain of Islam. The first is political: frustration at Western intervention in the Muslim world. The second is intellectual: the rise of Wahhabi Islam, a more fundamentalist interpretation of Islam subscribed to by Osama bin Laden. El-Ansary says fundamentalists have distorted Islam for political purposes.

"Basically what they do is they take verses out of context and then use that to justify these egregious actions," he says.

El-Ansary says we are seeing more religious violence from Muslims now because the Islamic world is far more religious than is the West. Still, Jenkins says Judeo-Christian cultures shouldn't be smug. The Bible has plenty of violence.

"The scriptures are still there, dormant, but not dead," he says, "and they can be resurrected at any time. Witness the white supremacists who cite the murderous Phineas when calling for racial purity, or an anti-abortion activist when shooting a doctor who performs abortions.

In the end, the scholars can agree on one thing: The DNA of early Judaism, Christianity and Islam code for a lot of violence.


Further reading: 30 Reasons Why Bryan Fischer is Dangerous and Must Be Stopped