Florida, you so crazy.


In what St. Petersburg police are calling a weird religious ritual, they have arrested 35-year old Danielle Harkins for encouraging several teenagers to cut and burn themselves.

The cutting was said to release evil spirits from their body, and the cauterizing of the wounds with fire was to prevent the spirits from getting back in.

The event happened close to the St. Petersburg Pier downtown.

Police say only two of the teenagers were actually cut.

According to authorities, she caused second-degree burns in an attempt to "brand" one of the students' hands with a cigarette lighter. Because of windy conditions next to the pier, the flame wouldn't stay, so she poured perfume on the wound and set it on fire.


"There was apparently some chanting and then dancing around this fire that was taking place," St. Petersburg Police Department spokesman Mike Puetz told Fox Tampa Bay.

Two kids were cut, and one sustained second-degree burns after the teacher allegedly poured perfume on his wound and lit it with a cigarette lighter, investigators told WTSP.

One of them was cut in the neck with a broken bottle and the wound was cauterized with a heated-up house key, authorities told Bay News 9.

Fischer: Gays Cannot Be Reasoned With Because God Has Given Them Over To Depraved Minds

Bryan, that's actually a pretty apt description of yourself and your fellow Christian Right lunatics.


"And the reason that gays and liberals and the like cannot be reasoned with is because God has given them over to a "depraved mind," so "their thinking is messed up [and] they don't process information the way normal people process information."

One need not be a genius to know how this one ends.

I've read it so that you don't have to, but you can enjoy the below nuggets. It is important to note that catholic.org is not a satire site.


"I think our girls might be better prepared for true leadership if they are at home learning to serve their family by doing kind little things like baking cookies, rather than out selling them as little future-activist fund-raisers."

"The end goal of developing character is not to run for office, be a corporate officer, or become famous for discovering cures. That turns you into an object held up for scrutiny based on what you accomplish professionally, and it sets unreasonable expectations. It is anything but feminine."

"...not everyone can be a leader, so instilling this ideology in girls only sets most of them up for unrealistic, false failure, a sense of failure that is not really failure at all."

"Why isn't picking a valiant knight for a husband who dotes on you, provides for you, and admires you for the sacrifices you make to raise your children considered high status?"

"...they might be better prepared for true success if they understand the magnificent importance of standing by your man."

"...we will definitely be foregoing the green uniforms and sashes for something a little more mysterious and lacy - like chapel veils."

There you have it, folks. We should refrain from telling our girls that they can be anything they want. That's boy stuff. Forget Marie Curie, Flannery O'Connor, Condoleezza Rice, Toni Morrison, Henrietta Swan Leavitt, Jane Goodall, Serena Williams, Oprah Winfrey, and Sally Ride. Those ladies should have left that stuff to the men.

Stop telling our girls that they play a part in changing the world. We wouldn't want to set them up for disappointment. Real success comes from knowing their place.

It's a man's world out there, baby.

Or so say the men in the Vatican.

Bryan Fischer: Allowing Gay Parents To Adopt 'Is A Form Of Sexual Abuse'

Bryan Fischer is in top form in today's anti-gay rant in which he declares that allowing gay parents to adopt is a "form of sexual abuse."

Something appears to be wrong with religious morality.

If we were to make an assessment from the following recent news headlines, we might say that religious morality is broken: 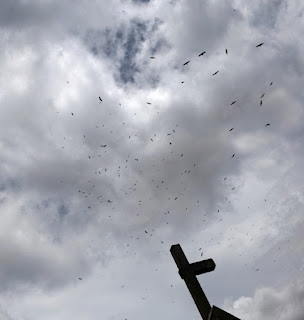 Fischer: 'It is Altogether Right to Discriminate Against Homosexual Behavior'

In each case, common sense, compassion, and empathy have been outright rejected in favor of a flawed morality based on religious doctrine. In each instance, religious ideology dictates that the infliction of discrimination, oppression, suffering, or death is validated by the belief that these actions please a supernatural being.

The problem here is that holy books say some crazy things -- things that advanced modern societies know better than to embrace. We know that rape, theft, slavery, and murder are not conducive to maintaining a healthy, flourishing society. It does not take a holy book for us to know this.


According to Divine Command Theory, nothing is right or wrong unless God makes it so. Whatever God says goes. So if God had decreed that adultery was permissible, then adultery would be permissible.

Let's take this line of reasoning to its logical conclusion. If the Divine Command Theory were true, then the Ten Commandments could have gone something like this: "Thou shalt kill everyone you dislike. Thou shalt rape every woman you desire. Thou shalt steal everything you covet. Thou shalt torture innocent children in your spare time. ..." The reason that this is possible is that killing, raping, stealing, and torturing were not wrong before God made them so. Since God is free to establish whatever set of moral principles he chooses, he could just as well have chosen this set as any other.

In other words, human beings have the capacity to discern which religious edicts are ill-advised, inhumane, or antiquated. We do not require another religious edict to tell us this. We simply rely on our sense of compassion and our morality, both of which have evolved over millions of years (and which were evolving long before monotheism took hold.)


Certainly religion has helped millions of people in the past, helps millions today and will continue to help millions in the future. But for all its benefits in offering moral guidance and meaning in life, in today’s secular world religion alone is no longer adequate as a basis for ethics. One reason for this is that many people in the world no longer follow any particular religion. Another reason is that, as the peoples of the world become ever more closely interconnected in an age of globalization and in multicultural societies, ethics based in any one religion would only appeal to some of us; it would not be meaningful for all.

What we need today is an approach to ethics which makes no recourse to religion and can be equally acceptable to those with faith and those without: a secular ethics.

Many say that without religion, we would not know the difference between right and wrong. If a commandment is the only thing keeping us from murdering other people, we humans are a pretty lousy bunch.

As Michael Shermer states, "As a species of social primates, we have evolved a deep sense of right and wrong to accentuate and reward reciprocity and cooperation and to attenuate and punish excessive selfishness and free riding."

Sadly, however, we see stories every single day in the news in which humans use religious ideology to undermine cooperation, to reject reciprocity, and to validate selfishness, oppression, discrimination, and violence.

Fundamentalism is the problem. It is the unwavering adherence to Bronze Age religious doctrine that allows hatred to disguised itself as morality.


Fundamentalists correctly perceive that universal moral standards are required for the proper functioning of society. But they erroneously believe that God is the only possible source of such standards. Philosophers as diverse as Plato, Immanuel Kant, John Stuart Mill, George Edward Moore, and John Rawls have demonstrated that it is possible to have a universal morality without God. Contrary to what the fundamentalists would have us believe, then, what our society really needs is not more religion but a richer notion of the nature of morality.

Where, then, you might ask, should we receive our moral code, if we are not to rely on scripture?

Astrophysicist Neil DeGrasse Tyson has a pretty simple way of approaching this problem:


“For me, I am driven by two main philosophies: know more today about the world than I knew yesterday and lessen the suffering of others. You'd be surprised how far that gets you.”