The Little Blog Post That Could: Things Learned, Additional Thoughts

When I started writing this blog, it was simply a place to collect my thoughts on the things which interest me (religion, science, politics, and culture), the way in which these things are entangled, and they way these things affect our daily lives. If people stumbled across these missives and found something interesting, or thought-provoking, then that was gravy.

When I sat down Wednesday night to type up my thoughts on the NC marriage ban amendment, I never would have imagined that (as of 9.18), the number of people who viewed the post would fill the Rose Bowl to capacity. The number of Facebook shares has surpassed 26,000. These numbers continue to grow, and that simultaneously blows my mind and fires me up. 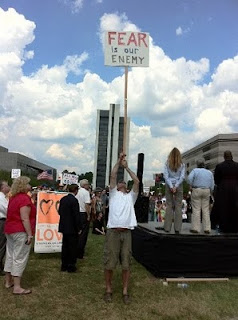 I have learned a lot over the past few days. One thing I've learned is that I have a lot to learn -- about the diverse LGBT community and the variety of issues this community faces on a daily basis, about the intricate (and often sleazy) politics that happen behind closed doors, and about the application of the law in religiously entangled legislation.

I have learned that I need to do more, personally, to help. Until last week, I have been mostly a silent ally. Sure, I have been posting stories and links related to LGBT equality, and I do speak up when I see or hear others being discriminated against, but I have not done much of anything that couldn't be accomplished by sitting behind a computer keyboard. The people who have reached out to me over the past few days have inspired me to do more, and I'm ready to get my hands dirty.

I wish I could reach out and personally thank each and every individual who shared the link, who re-posted, who called, wrote, or messaged me to say 'thanks.' I never intended it to be about me (more than a few have characterized the post as a narcissistic exercise in broadcasting just how 'enlightened' and 'forward-thinking' I am -- anyone who knows me personally knows this is far from accurate.) This was not about me, it isn't now, and it won't be.

I haven't quite known how to react the overwhelming response to the post, other than to turn it into fuel to do more. Behind every note, tweet, share, comment, etc. is a human being, and that is not lost on me.

I wanted to touch briefly upon some additional thoughts, reactions, and arguments that I did not include in the original post. Several items are things that have come to light since then the original post was written. Many are things I have learned from those who have shared information with me, and they deserve attention.

My arguments for LGBT equality should not be remarkable. I am incredibly grateful for all of the people who reached out to express their appreciation for the arguments I made in favor of equality. It was incredibly touching to hear from everyone, and many of the anecdotes were heartbreaking, and incredibly moving. But I couldn't help but feel overwhelmed by the feeling that the arguments I made should not be notable in any way. This should be a no-brainer.

Not enough straight allies are speaking up. There are many, many straight allies, and straight ally organizations that are making a huge difference, and in no way should their tireless work be overlooked. But it became clear to me last week that there are legions of us who are simply not making our voices heard (I was one of those people at one time). If you are straight, and are against discrimination, please help to build the momentum. Be a part of this movement to oppose the amendment on the May 8 ballot. As straight allies we need to speak to our families, our neighbors, our faith leaders, and our congregations. We need to not be afraid or embarrassed to put pro-equality bumper stickers on our cars, or put signs in our yards. We need to not be afraid of asking our ministers, mayors, and various organizations what they think about the ban, and what they are doing to make a difference. If you don't know what you can do, reach out to someone who can provide you with direction.

This doesn't have to be about religion. We need to remind people that, whatever they may believe, this amendment debate is a legal matter -- a matter of rights. This is about honoring the First Amendment of our Constitution, and its Establishment Clause. We should no more base our laws on Judeo-Christian dogma than we should base them on Sharia Law. Any law which is rooted in religion requires those who do not subscribe to that particular religion to submit to someone else's belief system. This is wholly un-American. Unfortunately, this amendment will largely come down to religion. We must speak with churches and religious organizations to help them view this as a human rights issue, and a constitutional issue, and not as a matter for religious organizations to dictate (even though religious groups can be instrumental in changing the tide). See Equality NC's Statement of NC Clergy and Faith Leaders Against the Anti-LGBT Constitutional Amendment.

Everyone knows someone influential. Think hard. Surely you know someone who is influential in your community, in your city, in your state, or beyond. Every single person of influence can be instrumental in changing minds. Look at your Twitter followers. Does this list include anyone with tons of followers, or who is a regional or national celebrity? Send them a message. This isn't a time to be shy. Ask them to tweet a link that will inform their followers about the anti-LGBT amendment and urge them to pass the link along to others, to get involved, and to speak up. Have a relative or family friend at a newspaper, magazine, website, radio station, or TV station? Ask them to do a story, or to publish your letter or article. Talk to bands, athletes, artists, business owners. Ask them to organize benefits, to post information on their social media profiles, and to speak out at public events. Ask them to donate, volunteer, or to ask others to do so. These days everyone is so interconnected through social media that we'd be idiots to not use these connections to actually alter the course of history. Remember what social media did in for the Arab Spring?

This amendment is not just about 'marriage.' Even if people believe that this Amendment will not stop same-sex couples from entering into civil unions, it is naive to accept this line of thinking. As Equality NC points out:

The Amendment still has the potential to invalidate domestic violence protections for members of unmarried couples, as an Ohio court did with even narrower language in its state’s marriage amendment.

The Amendment could still interfere with existing child custody and visitation rights that seek to protect the best interests of children.

The revision does not preclude courts from reading that language to invalidate trusts, wills, and end-of-life directives – which are not “private contracts” – in favor of an unmarried partner.
Further, the revision would still invalidate domestic partner benefits now offered by several municipalities.


Voting against the amendment will not legalize marriage. Because of the divisive and emotional nature of the same-sex marriage debate, it's very easy to forget that no matter what the outcome of the May vote, same-sex couples will not be able to marry in North Carolina. We need to remind people about this. It's important in a few ways. First, those who oppose same-sex marriage on religious grounds can still vote against the amendment in good conscience, on the grounds that we should not write the denial of anyone's rights into our state's constitution. Secondly, for those of us who are in favor of equality, this vote is not the end of the fight.

This ban is bad for business. Many readers have stressed the impact that this ban will have on NC's economy. Several out-of-state commenters have stated that if this ban were to pass they would vote with their pocketbooks by not vacationing in our state, a state in which they would apparently be unwelcome. In addition, as Equality NC has stated, the amendment "intrudes on businesses' right to provide competitive benefits to their employees and it signals to major employers that our state is not welcoming of the diverse, creative workforce that is needed to compete in the global economy." To underscore this, just last week, Facebook's co-founder, Chris Hughes spoke up to voice his disapproval of the amendment, stating, in part:


As the co-founder of Facebook, I have some experience with the challenges of attracting the kind of driven, dynamic and diverse employees it takes to build a fledgling start-up into a full- fledged economic success story.

Companies like Facebook, Google and Apple are the future of our global economy. But the proposed anti-gay constitutional amendment signals to these and other major employers, as well as their mobile, educated employees, that North Carolina does not welcome the diverse workforce that any state needs to compete in the international marketplace.

In short, this amendment is bad for business, bad for the perception of my home state on the national stage, and a far cry from job-creating legislation that North Carolina lawmakers should be focused on.

But the negative business impact is far from the only harm of this amendment. Growing up in a conservative atmosphere in Hickory, North Carolina, I felt first-hand the stigma of being different in a Southern state—a feeling that made it clear to me that I was not welcome in North Carolina.

The proposed discriminatory legislation will only perpetuate this stigma for a new generation of creative, talented youth, uninterested in second-class citizenship in a state they call home.


Politics in NC are sleazier than ever. I know that politics and politicians can be incredibly sleazy. That's no real surprise. But I have to admit I was really disappointed to hear some of the tactics used to pass the amendment. Over the past few days I have spoken to a lot of folks about what has transpired over the past week or so. According to a source who was close to many of these discussions, Sen. Richard Stevens (R-Wake), one of the fence-sitting Republicans, had indicated that he was considering voting against the amendment. Allegedly, Stevens was told that if he didn't vote along party lines, he would lose his joint chair position of the Committee on Appropriations, and, in so many words, would not have much of a future in politics. At least ten Republicans allegedly wanted to vote against the amendment, according to the source. I know i am naive, but I still can't quite get over the fact that human beings would sink quite so low to ensure other human beings are denied rights. If this is not enough to make you vote against the amendment, I question whether or not you have a beating heart.

It's very easy to get angry when we hear this stuff. And, honestly, anger can be a great motivator. But I have a hard time letting the anger drown out the messages of solidarity over the past few days, so many from other states and other nations, full of hope and encouragement for the people of North Carolina.

Although it's inspiring to think about all those people filling up the Rose Bowl and rooting for equality, I still realize that this is a relatively small number. There's still a lot of work to be done.