Belief in Evolution vs. National Wealth: Why Does The US Not Fit The Trend?

via Calamities of Nature: 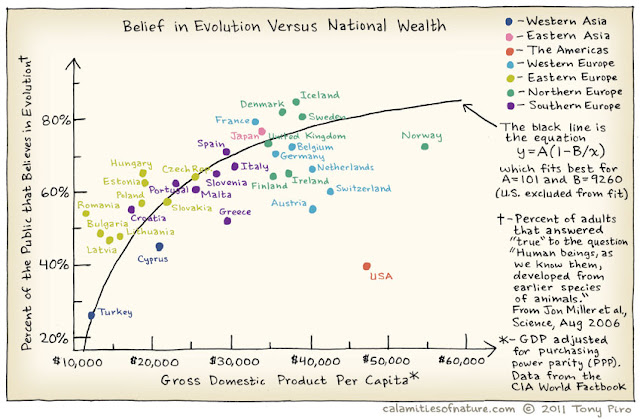 The United States is an odd bird, clearly. This graph reminded me of a post on PZ Myers' Pharyngula blog in which he discussed an international poll showing the US as being near dead last in acceptance of evolution (just above Turkey, another country with a distinct fundamentalism/modernism issues).

What, pray tell, could cause the US to remain such an outlier?

Well, first there is religiosity:


The total effect of fundamentalist religious beliefs on attitude toward evolution (using a standardized metric) was nearly twice as much in the United States as in the nine European countries (path coefficients of -0.42 and -0.24, respectively), which indicates that individuals who hold a strong belief in a personal God and who pray frequently were significantly less likely to view evolution as probably or definitely true than adults with less conservative religious views.

And then there's this:


Second, the evolution issue has been politicized and incorporated into the current partisan division in the United States in a manner never seen in Europe or Japan. In the second half of the 20th century, the conservative wing of the Republican Party has adopted creationism as a part of a platform designed to consolidate their support in southern and Midwestern states—the "red" states. In the 1990s, the state Republican platforms in seven states included explicit demands for the teaching of "creation science". There is no major political party in Europe or Japan that uses opposition to evolution as a part of its political platform.

As Myers noted, the paper ends on a sad note:

The politicization of science in the name of religion and political partisanship is not new to the United States, but transformation of traditional geographically and economically based political parties into religiously oriented ideological coalitions marks the beginning of a new era for science policy. The broad public acceptance of the benefits of science and technology in the second half of the 20th century allowed science to develop a nonpartisan identification that largely protected it from overt partisanship. That era appears to have closed.

Nigel Barber, in Psychology Today, asks if Atheism will eventually replace religion, as research shows that atheism "blossoms amid affluence where most people feel economically secure."


It seems that people turn to religion as a salve for the difficulties and uncertainties of their lives. In social democracies, there is less fear and uncertainty about the future because social welfare programs provide a safety net and better health care means that fewer people can expect to die young. People who are less vulnerable to the hostile forces of nature feel more in control of their lives and less in need of religion. Hence my finding of belief in God being higher in countries with a heavy load of infectious diseases.

These findings are not surprising, but his piece does not acknowledge the fact that the US, a developed country where most have access to shelter, healthcare, and education, remains extremely religious (and relatively anti-evolution). Unfortunately, in the US, there appears to be no level of affluence and comfort capable of decoupling religion and politics, despite constitutional assurances explicitly requiring it.
Posted by eshep on 7/15/2011