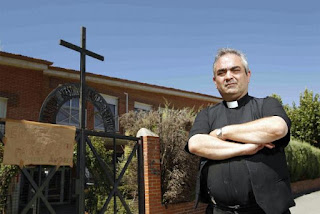 Andrés García Torres, a priest in the Madrid dormitory town of Fuenlabrada, has been asked to step down after a photo surfaced of the priest in a shirtless embrace with a 28 year old Cuban seminarian.

According to a report, Torres has been ordered by the bishop to undergo psychiatric therapy to ‘cure’ his homosexuality, and to have an HIV test administered.

Torres claims that he and the seminarian are only friends, and has plans to go to Rome to challenge the claims. 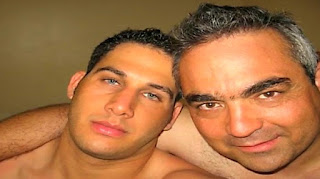 "Let them measure my anus and see if it is dilated," said Torres.

Torres says that his mother has cried nonstop since the accusations. The locals of Fuenlabrada reportedly praise Torres as a dedicated and caring priest. He has gained over 1,000 signatures of support.

NOTE: There seems to be more to the story than can be gleaned by the English versions of this story (Spanish stories here), but I barely passed Spanish in college. Spanish-fluent readers, feel free to comment/elaborate.