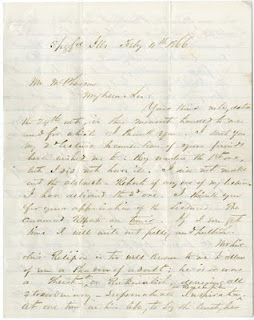 A newly resurfaced letter written by Abraham Lincoln's law partner, William Herndon, recently went up for sale.  The 3-page letter, priced at $35,000, addressed to Edward McPherson, Clerk of the U.S. House of Representatives, appears to be an attempt to set the record straight on Lincoln's faith, after a series of biographies following his death.  The letter is signed Feb. 4, 1866, a year after Lincoln's assassination.

Herndon wrote:
"Mr. Lincoln's religion is too well known to me to allow of even a shadow of a doubt; he is or was a Theist & a Rationalist, denying all extraordinary -- supernatural inspiration or revelation."

"At one time in his life, to say the least, he was an elevated Pantheist, doubting the immortality of the soul as the Christian world understands that term.  I love Mr. Lincoln dearly, almost worship him, but that can't blind me. He's the purest politician I ever saw, and the justest man."

The letter isn't exactly scandalous, or jaw-dropping, in any sense.  It does, however, shed more light on the complex, and evolving, religious beliefs of one of America's most important figures.  And in a climate in which we debate the nature of religion as it relates to our nation's history, it reminds us that religious diversity and skepticism are as hardly recent developments, and are as American as traditional Christianity.
Posted by eshep on 4/15/2011 1 comment:

A new study, by Dr Elissaios Papyrakis at the University of East Anglia and Dr Geethanjali Selvaretnam from the University of St Andrews in the UK, seems to state the obvious: Because of longer life expectancy, more people are postponing active religious participation.
It is undeniable that death plays a major role in religious belief.  Our earliest evidence of religious belief is based on the ritual treatment of the dead.  Evidence from burial sites and associated artifacts supports early belief in the afterlife. 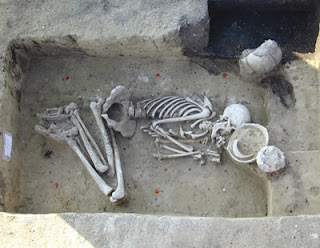 Belief in the afterlife is common in all human cultures, and is somewhat of a cornerstone of religious belief.  And although religion has provided many benefits to humans throughout history, perhaps the most potent selling point of many religions has been the promises of an afterlife.  And certainly the threat of an eternity of hell has been one of religion's greatest motivators.
If the afterlife serves as one of religion's major attractions, it seems logical to expect that, with an ever-increasing life expectancy in developed societies, making peace with one's god would lose some of its urgency.
"The findings have important policy implications for what churches want to do and how they attract members," explained Dr Papyrakis, of the School of International Development at UEA. "Many religions and societies link to some degree the cumulative amount of religious effort to benefits in the afterlife. We show that higher life expectancy discounts expected benefits in the afterlife and is therefore likely to lead to postponement of religiosity, without necessarily jeopardising benefits in the afterlife."
From the article:
Religions that largely delink salvation/damnation to the timing and amount of religious effort will particularly need to resort to such means to boost membership numbers. In most religions, the perceived probability of entering heaven or hell depends to a certain degree on the individual's lifetime behaviour. The degree of this varies across religions, being relatively high in Buddhism and Catholicism, but lower in Protestantism. In Calvinism, in particular, salvation/damnation is largely seen as predestined.
In poorer countries where life expectancy remains low, a larger share of the population, both young and old, is concerned about what happens after death, which naturally encourages religious participation.
Posted by eshep on 4/12/2011 No comments:

A Complete History of the Universe, From The Big Bang to the Internet

Historian David Christian narrates a complete history of the universe, from the Big Bang to the Internet, in a riveting 18 minutes. Totally worth your time.

From the TEDTalks description: "This is "Big History": an enlightening, wide-angle look at complexity, life and humanity, set against our slim share of the cosmic timeline."

Dr. Christian recently announced his initiative, The Big History Project, to teach big history to secondary school students in Australia and the United States. We need initiatives such as this, especially at a time when Creationism incessantly tries (and succeeds) to nudge its way into classrooms.