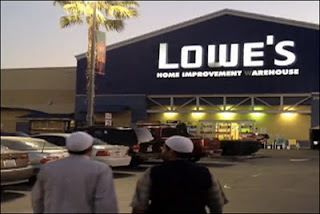 In case you've been living under a rock this month, you're aware that Lowe's is receiving a great deal of criticism for pulling their ads from the TLC reality show All American Muslim.

Lowe’s yanked their ad from the series after the Florida Family Association encouraged members to email the program’s advertisers.


“The show profiles only Muslims that appear to be ordinary folks while excluding many Islamic believers whose agenda poses a clear and present danger to liberties and traditional values that the majority of Americans cherish. Clearly this program is attempting to manipulate Americans into ignoring the threat of jihad and to influence them to believe that being concerned about the jihad threat would somehow victimize these nice people in this show.”

OK, not really. The below satirical video was directed by Gregory Bonsignore, and stars Rizwan Manji and Parvesh Cheena, from the NBC sitcom Outsourced. (Read more about the project here.)