Ask A Humanist, Vol. 7: Isn't It Hypocritical For A Non-Believer To Celebrate Christmas?

As a non-believer, I've heard many a wisecrack from my Christian friends as the holidays approach. They're all in good fun. There are good ones about decorating the 'Darwin tree,' singing science carols, or toys being delivered by Sagan Claus. 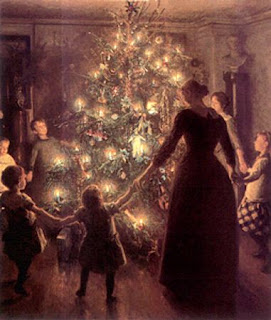 While these are just friendly jabs between friends, they say a lot about society's attitudes on religious rituals, customs, and appropriation.

We have all witnessed the War on Christmas that erupts each year (mostly fabricated by Fox News and the Christian right). We have all been beaten over the head with Black Friday commercialization and the ensuing endless stream of secular Christmas specials devoid of any mention of Jesus (save for good ol' Charlie Brown).

There is a sentiment felt by many Christians that non-Christians shouldn't be able to join the party. For a long time in America, it was the Jews who sat on the sidelines while Santa delivered sack-loads of toys to their Christian neighbors. Now, as the non-religious population has become a sizable demographic (the so-called 'religious nones'), many Christians are dismayed, and perhaps bewildered, to not see them sitting on the sidelines as well.

I grew up in a religious household. We celebrated Christmas each year in the same way that most Christians do. We decked the halls, wrote letters to Santa, decorated a tree, hung wreaths, lit candles, baked cookies, opened Advent calendars, set up a table-top nativity scene, sang carols, wrapped gifts, and reflected upon the birth of Jesus and the real meaning of Christmas.

My parents participated in these same rituals and customs growing up, as did their parents, grandparents, great-grandparents, and so on. I imagine that my family's Christmas customs are nearly as old as the customs themselves.

Like non-practicing Jews who light the Menorah at Hanukkah, the customs associated with Christmas are important to who I am and where I came from, whether or not I personally accept Christianity's claims. (I don't -- and this conclusion was not arrived upon easily.)

I have wonderful childhood memories of Christmastime. It is a time of wonder and joy for any child who experiences it. Some of these memories are as powerful, and as comforting, as any memories I have.

It is no coincidence that retailers infuse the air with the smells of cinnamon, pine, and cider during the Holidays. We are psychological beings, and our memories carry deep associations with sights, sounds, and smells of our experiences. Just as we might like playing a particular song that connects us with a specific joyous experience, partaking in the sights and sounds of the holidays can elicit many of the feelings we experienced at a simpler, more innocent time in our lives. We also find pleasure in sharing these memories, and making new memories, with our own children.

Participating in the customs and rituals associated with Christmas, despite our religious conviction (or lack thereof), is a beautiful way of appreciating and strengthening our bond with the past, of passing this gift of heritage along to our children, and of extending these bonds into another generation. Whether or not the next generations choose to believe in the tenets of Christianity is up to each of them. I don't wish to deprive them of that opportunity.

So, sure, all this sounds great, but still, isn't it just a case of having your cake and eating it too?

If participating in the customs of my ancestors despite lacking the same beliefs is wrong, then a whole lot of customs we participate in each year are wrong as well.

The Christmas narrative in and of itself has many similarities to other religions that pre-date Christianity, suggesting that elements may have been borrowed. Jesus was not the first miracle-worker born to a virgin who would later be crucified and resurrected.

The date of Christmas was chosen to coincide with winter festivals that pre-date the holiday. The ancient Roman festival of Saturnalia featured gift-giving, visiting with friends and loved ones, the lighting of candles, and a feast. Pagan Scandinavia celebrated Yule, for 'a fertile, and peaceful season,' with customs such as the Yule log, singing, and the Yule boar (reflected today in the Christmas ham). Koleda, an ancient Slavic ritual celebrating death and rebirth, featured a custom of roving from home to home singing songs and receiving gifts. Christmas customs related to greenery, lights, and charity pre-date Christmas and were likely adopted from Roman New Year celebrations.

Anyone with a knowledge of religious customs throughout the ages would agree that there are not many Christmas customs that did not exist prior to the holiday's origin.

Despite the mixed religious roots of Santa Claus, he is largely a secular phenomenon, along with Rudolph, Frosty the Snowman, and other recent staples associated with the season. Puritans, in fact, opposed celebration of Christmas at all for nearly two centuries because of its secular and pagan associations.

We can point to any number of holidays that Americans participate in despite not really 'deserving' to celebrate them. We don't need to be religious, or Irish, to wear green and drink a pint of Guinness on St. Patrick's Day.  We don't need to be Mexican to have nachos and a Corona on Cinco de Mayo. We don't need to believe in pagan supernaturalism to dress up on Halloween and trick-or-treat. The eggs and bunnies associated with Easter (named, of course, for the goddess Ēostre of Anglo-Saxon paganism) are customs that millions of non-pagans enjoy each year.

So, really, this business of appropriation is nothing new. As it says in Ecclesiastes 1:9 (although I'm sure it was said before), "There is no new thing under the sun."


The Message of Christmas Is A Good One

You really couldn't ask for a greater message: Love everyone, regardless.  Extend kindness to all, even those who you may feel are undeserving. Always strive for justice and peace. Be charitable, and be forgiving.

Whether or not I actually believe that a historical Jesus preached this message, and whether or not I accept that this figure was born of a virgin, was the son of God, worked miracles, was crucified, was resurrected, and ascended bodily into heaven, the philosophies associated with Jesus are certainly worthy of observance.

We could do much worse than spending a portion of our year with a heightened sense of awareness of these sentiments. These philosophies are certainly not unique to Christianity, nor were they new philosophies at the time Jesus would have lived, but his message, as well as his story, was a big part of my family's heritage and was a big part of my own childhood. Acknowledging this through the the observance of long-practiced family customs and rituals is anything but dishonest.

There are many Humanists and non-believers who choose to refrain from participating in religious holiday traditions. There is certainly nothing wrong with that. There are degrees of non-belief.

While I may reject supernatural and religious dogma as a basis for morality, I don't reject religion as a whole. I don't discount the benefits many receive from religion, and I certainly understand and accept the concept of sacredness.

I am lucky in that I live in a society that holds dear the right to religious freedom. In my home, we exercise this right by participating in customs associated with a variety of religions. Our kids love to play dreidel for chocolate gelt during Hanukkah. They have lit the Menorah. They learn about the vast array of religious customs and observances around the world, and throughout history, and some interest them more than others.

A religiously literate child will not grow to be a xenophobic exceptionalist. She will very likely grow to be tolerant, charitable, kind, and will likely value peace and justice.  Much like this Jesus person that is celebrated this time of year.