Pope: Gay Marriage Is A Threat To Humanity 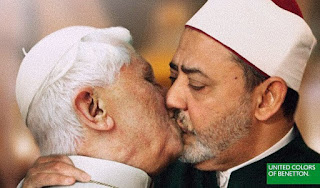 Pope Benedict said Monday that gay marriage was one of several threats to the traditional family that undermined "the future of humanity itself."

He told diplomats from nearly 180 countries that the education of children needed proper "settings" and that "pride of place goes to the family, based on the marriage of a man and a woman."

"This is not a simple social convention, but rather the fundamental cell of every society. Consequently, policies which undermine the family threaten human dignity and the future of humanity itself," he said.

So, I suppose this means that the Pope doesn't think gays are human?

And how exactly does gay marriage undermine the family?

Because the child abuse rate is at 0% in lesbian households?

Because same-sex parents raised this kid?

Because 21 studies of children of homosexual parents uniformly found no systematic differences between children reared by a mother and father and those raised by same-sex parents?