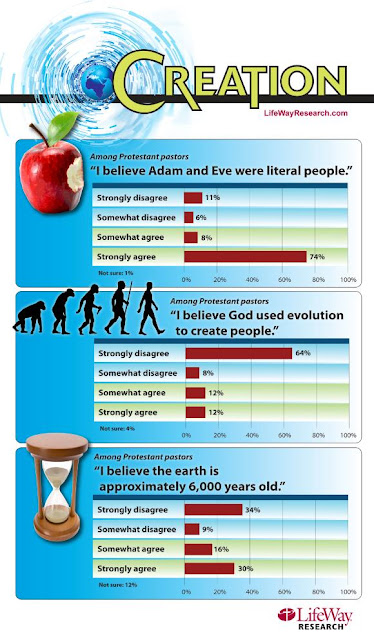 Protestant pastors overwhelmingly believe that God did not use evolution to create humans, and believe that Adam and Eve were literal people. They are, however, evenly split on whether the earth is only thousands of years old.

This is according to a survey of 1,000 American Protestant pastors released on January 9 by LifeWay Research.


When asked to respond to the statement, "I believe God used evolution to create people," 73 percent of pastors disagree, with 64 percent strongly disagreeing and 8 percent somewhat disagreeing. Twelve percent each somewhat agree and strongly agree. Four percent are not sure.

Of course, Lifeway is in the business of selling bibles, so I'm not so sure how seriously we should take this survey. Regardless, those numbers are not terribly encouraging.

However, there are several telling (and fairly obvious) findings from the survey:
So, even if LifeWay is looking to sell us bibles, their survey shows us that if young Protestants get a college degree and move to an area that is not saturated with religious ideology, they have a decent chance of escaping the ignorance they were born into.