While you and your family gather around the television to watch the Super Bowl this year, you may be subjected to graphic anti-choice ads featuring aborted fetuses. 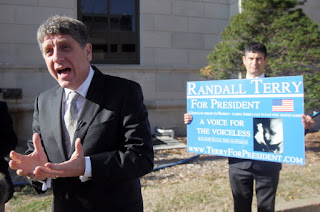 Randall Terry, anti-choice activist and founder of Operation Save America (formerly Operation Rescue), has found a loophole that will allow him to run the ads on local stations during the Super Bowl. How can he do this? Quite simple: He's running for President of the United States.

Via The New Civil Rights Movement:


Terry, who has spent a year in jail and been arrested 50 times for his anti-abortion efforts, is using a Federal Election Commission loophole that ensures ads for political candidates cannot be prohibited within 45 days of an election. Apparently, primaries count, so Terry will be running ads on local stations during Super Bowl XLVI February 5.

Got that? Terry has filed to run for president.

If you think his tactics won't work, you might want to think again.


Terry has already run political ads featuring graphic images of babies killed by abortion during the first and second trimester. The ads were part of a three day ad run in New Hampshire on WBIN. The ads consisted of four 30 second spots that ran in rotation that attacked Obama’s support of child killing by abortion. (Greeley Gazette)

Of course, you can predict that any opposition to the ads will be met with the old standby: "If abortion isn't wrong, then you shouldn't mind seeing the pictures on TV."

A stupid remark that misses the point, but I don't really care to see graphic images of babies being born during Sunday TV commercials, either.