Santorum Wants To Be The Dictator Of Your Sexual Realm 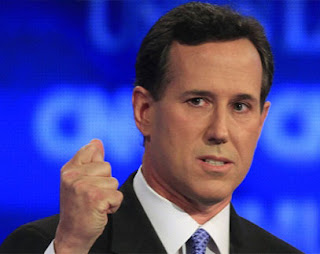 In light of Santorum's recent surge in the polls, and his near-tie with Romney in Iowa, it's worth revisiting his appearance on Piers Morgan's show.

In the below interview from August, Morgan asks Santorum whether or not homosexuality is a sin.

MORGAN: Well, let's clarify a few things. Do you think homosexuality is a sin?

SANTORUM: Well, that's a decision not for a politician. That's a decision for someone who is a cleric. I'm not in that line of work. There are a lot of things in society that are, quote, "sins" or moral wrongs that we don't make illegal. Just because something is immoral or something that is wrong doesn't mean that it should be illegal, and that the federal government or any level of government should involve themselves in.

He goes on to state that, if he were a state legislator in Texas at the time of Lawrence v. Texas he would have voted against it. "I don't think that's something the state should involve itself in," stated Santorum.

Piers then presses him further on the homosexuality issue. (You have to give Morgan credit here -- his 'entertainment' show on occasion demonstrates more journalistic doggedness than any of the major network or cable news shows.)

MORGAN: So, you must have a view about whether homosexuality is a sin. I think if American people want to vote for you either way as president, they are entitled to know an honest answer to a straightforward question. You did invite me to ask you any question I liked.

SANTORUM: Yes, I did. And, of course, the Catholic Church teaches that homosexuality is a sin. I'm Catholic and subscribe to the Catholic Church's teaching. But that's not relevant from the standpoint of how I view these issues from a public policy of view and that's (why) I answered the question the way I did. From a public policy point of view, there are a lot of things I find immoral -- morally wrong or as you would use the term "sinful" that don't necessarily rise to the level that government should be involved in regulating that activity. And so, I answered it correctly. I answered it, in fact, succinctly and directly, that while I think things are morally wrong, that doesn't rise to the level of government involvement in that activity.

So, the question seems to be: Which 'sins' merit government involvement in Santorum's world? Certainly consensual sex acts between two adults in private should not be on par with, say, rape or burglary.

In Santorum's blurred church-state view, these things apparently do rise to the level of government involvement.

Quite simply, Rick Santorum doesn't believe anyone should have sex unless it is a penis entering a vagina for the purpose of sexual reproduction. Recreational sex? Absolutely unacceptable.


“One of the things I will talk about, that no president has talked about before, is I think the dangers of contraception in this country,” the former Pennsylvania senator explained. “It’s not okay. It’s a license to do things in a sexual realm that is counter to how things are supposed to be.”

Counter to how things are supposed to be?

Who, exactly, decides how things are supposed to be? Apparently, it's Rick Santorum and the Catholic Church.