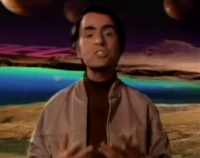 The Cosmic Calendar casts the 13.7 billion year lifetime of the universe into a single calendar year, and was popularized by Carl Sagan on his television series Cosmos, and in his book The Dragons of Eden.

I've previously posted about The Cosmic Calendar. It's a wonderful tool for truly appreciating the vastness of time -- something with which we humans have difficulty.

In a new rendition of The Cosmic Calendar, remastered in HD by Milky Way Musings, Sagan presents the history of the universe and the emergence of life on Earth in a mere 11 minutes.