Sarah Posner, over at Religion Dispatches, writes about how 2012 will be a "banner year in the faux religious discrimination wars." 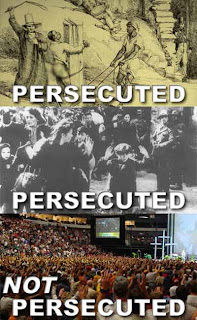 She highlights a full page ad placed in the Washington Post by the U.S. Conference of Catholic Bishops. The ad provided the Bishops with a venue to voice their disapproval of the Department of Health and Human Services rule which requires employer health insurance plans to provide contraception without co-pay. The Bishops claim that if Obama does not amend the rule, his administration will be guilty of religious discrimination.


The Bishops’ opposition to the Department of Health and Human Services rule—which they describe as mandating “preventive services” (scare quotes in original)—was to date the most public salvo from their Ad Hoc Committee on Religious Liberty. That effort was launched last June because, in USCCB president Timothy Dolan’s ominous words, “never before have we faced this kind of challenge to our ability to engage in the public square as people of faith and as a service provider. If we do not act now, the consequence will be grave.” At the Bishops’ annual meeting in Baltimore this past November, Dolan took his charges into conspiratorial territory, telling reporters that “well-financed, well-oiled sectors” were attempting to “push religion back into the sacristy.”

While many may see this as simply more of the same Catholic 'recommendations' we've seen over the years, the Bishops are poised to put their money where their mouth is.


Staffed with ten of the Bishops’ brethren, the Ad Hoc Committee will be assisted by the USCCB’s former top lawyer and now Associate General Secretary, Anthony Picarello, who served on Obama’s first Advisory Council to his Office of Faith-Based and Neighborhood Partnerships. A staff lawyer and a lobbyist have also been hired and assigned to the effort.

Testifying before the House Judiciary Committee Subcommittee on the Constitution last October, Bishop William E. Lori, chair of the Ad Hoc Committee, described LGBT equality and access to reproductive care as “serious threats to religious liberty,” that “represent only the most recent instances in a broader trend of erosion of religious liberty in the United States.” The problem, he went on, is like a disease that must be treated immediately, “lest the disease spread so quickly that the patient is overcome before the ultimate cure can be formulated and delivered.”

Louise Melling, deputy legal director of the American Civil Liberties Union, sees the Bishops’ framing as “significant,” noting that, “They’re really trying to put a spin on what’s happening, and they’re hoping that they can convince people that their rights are the ones being violated.”

These faux religious discrimination claims are a phenomenon that we have seen mirrored in US culture for years, although it seems to have been ramping up recently.

These claims come from two angles:

On one side, as Posner illustrates, we see religious organizations and legislators condemning any tax money being associated in any way with the funding of services at odds with religious teachings (contraceptives, abortion, etc). 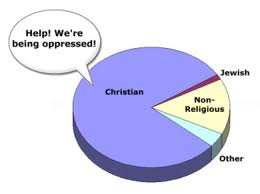 On the other side we see cries of religious persecution any time harmful or discriminatory religious ideology is condemned or challenged.

Daily, we hear politicians claiming that equal treatment of gays and lesbians encroaches on their religious liberty -- essentially their 'right' to aggressively discriminate against gays and lesbians.

Just a few days ago, I engaged Peter LaBarbera on Twitter. Peter LaBarbera is the president of the anti-LGBT Americans For Truth About Homosexuality, an organization which is classified as a hate group by the Southern Poverty Law Center.

LaBarbera had re-tweeted a comment that stated, "The left likes to immediately shut people's views down by shouting "Racist, sexist ,homophobe" - since 80s."

In other words, LaBarbera and his ilk believe that, if their religion states that something is true (i.e. that homosexuality is an 'abomination,' or that women should submit to their husbands), and they act on that 'truth' by way of discrimination, then society is wrong to condemn these acts as homophobic or sexist. They are scripturally 'true,' after all, and our constitution protects the freedom to practice our religion.

Recently, on the campaign trail, Rick Santorum stated that he would seek to invalidate gay marriages via a constitutional amendment. During his trip to Iowa this week, he stated (as he has on many occasions) that "rights come to us from God." This is not dog-whistle politics. There's no subtlety about it. This reflects Santorum's insistence (and that of many other GOP candidates and legislators) that anti-LGBT, anti-choice legislation is in keeping with God's law, and is therefore wholly American. 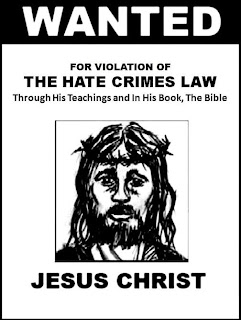 We have seen resistance to hate speech legislation (and same-sex marriage legislation) in which opponents wrongly proclaim that ministers would be prosecuted for preaching against homosexuality.

We have seen legislation which allows for anti-gay bullying, as long as it is religion-based.

The culture wars have come down to this: opponents of progressive legislation have run out of cards to play. Their beliefs are not backed up by the science. The studies do not support their anti-LGBT, anti-choice ideology. (And in the case of contraception, 98% of Catholic women use birth control, despite its ban in the church.) All they have left is the supernatural, which is protected by religious freedom, and that's the only card they have left to play.

What they fail to understand is that religious beliefs cannot become law simply because they are religious beliefs. Religious beliefs may indeed dovetail with secular law -- for instance, stealing is frowned upon for many reasons that have nothing to do with religion. It is not illegal because God said so somewhere in the Bible. We do not have laws against wearing blended fabrics -- such a law would not have a secular purpose.

If the basis of proposed legislation (or your opposition to legislation) in any way relies upon supernatural concepts (i.e. 'soul,' 'sin,' 'God,' etc.) you can be pretty sure that it's unconstitutional.

I would ask any religious conservative if they are okay with implementing Islamic laws requiring women to cover all of their bodies except their hands and face. If not, why? Most likely, they would answer that this is not something they believe, and that it as extreme and discriminatory. This is how many Americans view the beliefs of the Christian right.

To impose these laws on us is the same as imposing Islamic law on them. To deny citizens their secular rights because of your religious beliefs is impose your religion on those who do not subscribe.