Since my beloved Red Sox missed the playoffs following their curse-esque September nosedive, I have avoided watching baseball altogether this postseason. It's too painful. I didn't even have the chance to root against the Yankees in the World Series.

I have, however, found some consolation in the post-season tweets of astrophysicist Neil deGrasse Tyson. 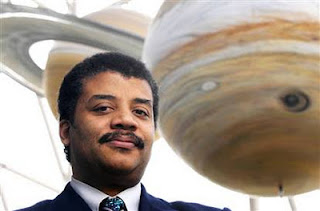 Tyson has wowed us for years with his intermingling of science and pop culture, He's showed up on Jeopardy!, Who Wants To Be A Millionare?, and Wait Wait...Don't Tell Me! He's appeared on The Colbert Report, The Daily Show, Conan O'Brien, and The Big Bang Theory. On his radio show, Star Talk, he has analyzed the physics behind the powers of superheroes.

Tyson's baseball tweets have run the gamut: the physics of baseball, breakdowns of player salaries, suggestions for new rules, and new criteria for awards.

I've collected some of his gems below (running in order, from the playoffs through the World Series):