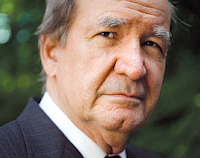 Paleoconservative (and Paleolithic) blowhard Pat Buchanan is currently on the road promoting his new book, Suicide of a Superpower: Will America Survive to 2025?

I am not going to pretend to have read Pat's book. Luckily, there are others out there willing to take one for the team.


If [conservative political commentator Heather] Mac Donald’s statistics are accurate, 49 of every 50 muggings and murders in New York are the work of minorities. That might explain why black folks have trouble getting a cab. Every New York cabby must know the odds, should he pick up a man of color at night.

Perhaps some of us misremember the past. But the racial, religious, cultural, social, political, and economic divides today seem greater than they seemed even in the segregation cities some of us grew up in.
Back then, black and white lived apart, went to different schools and churches, played on different playgrounds, and went to different restaurants, bars, theaters, and soda fountains. But we shared a country and a culture. We were one nation. We were Americans.

The white population will begin to shrink and, should present birth rates persist, slowly disappear. Hispanics already comprise 42 percent of New Mexico’s population, 37 percent of California’s, 38 percent of Texas’s, and over half the population of Arizona under the age of twenty. ……. Mexico is moving north. Ethnically, linguistically, and culturally, the verdict of 1848 is being overturned. Will this Mexican nation within a nation advance the goals of the Constitution—to “insure domestic tranquility” and “make us a more perfect union”? Or has our passivity in the face of this invasion imperiled our union?

There's more where that came from.

And here's Pat on LGBT equality:


A nation dedicated to the proposition that all are equal and entitled to equal rewards must end up constantly discriminating against its talented tenth, for that is the only way a free society can guarantee social and economic equality. And consider the costs incurred, the injustices done, the freedoms curtailed--all in the name of equality.

Can anyone believe this absurd notion of equality was intended by or written into the constitution by the Congress that produced the 14th Amendment? Although gay marriage has been rejected in 31 states in referenda, judges continue to declare that such unions be treated as marriages. An idea of equality rejected democratically by voters is being imposed dictatorially.

In December 2010, a repudiated liberal Congress imposed its San Francisco values on the armed forces by ordering homosexuals admitted to all branches of the service. Indoctrination of recruits, soldiers, and officers into an acceptance of the gay life style will transfer authority over the military, the most respected institution in America, to agents of a deeply resented and widely detested managerial state.


Media Matters has compiled highlights from Patty's talk show appearances surrounding his book tour, where he has been "defending his past anti-LGBT bigotry, knowingly appearing on a pro-white radio show, and refusing to disavow genetic theories of racial superiority and inferiority."