Guest Post: One Way I've Changed, Since Becoming A Dad

The below guest post was written by Matt Shipman, a science writer and father of three who lives in Raleigh. You can follow Matt on Twitter at @ShipLives or connect with him here on Google+. This is the first in an ongoing series of 'Allies For Equality' guest posts.

I've always felt that gay rights were important. I have gay friends and family members who I love and respect, so I could hardly feel otherwise. But gay rights have become increasingly important to me since I started a family. 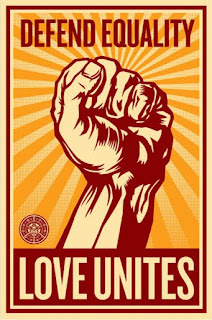 I have three wonderful children. They are the center of my universe, and I never knew it was possible to love anyone or anything as much as I love them. It is awesome, in the true sense of the word -- it inspires awe.

Whenever I see a news item about a child who has taken his or her own life as a result of bullying or ostracization, the first thing I think of is the fact that that was someone's child. I talk to, hold and comfort my children every day. I watch them play with other kids. Many of my closest friends have young kids. It is impossible to tell which of these youngsters will be gay. The idea that someone could want to hurt any of these children because of their sexual orientation triggers my protective instincts. But I can't follow my kids around for the rest of their lives and protect them, much less all of the other kids that call me "Uncle Ship" or "Mister Ship."

So I feel compelled to reject anything -- anything -- that seems to intimate that someone who is gay is somehow less important than someone who is straight. That runs the gamut from slurs to the rights that we all (should) enjoy as citizens. Being a child and a teenager is difficult enough. We don't need to introduce artificial hurdles that contribute, intentionally or not, to hateful behavior.