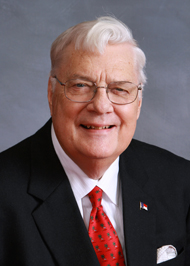 Via the Gaston Gazette:


Sen. Jim Forrester was pronounced dead about noon after suffering complications from cranial bleeding, said his sister-in-law, Sally Beach. He had been admitted to the Gastonia facility on Saturday morning, then lost conciousness Sunday morning, prompting family members to be called into town from across the country.

Forrester was 74. He was a retired physician with 20 years in the state Legislature. He gained notoriety in 2011 for several statements he made in relation to the anti-LGBT amendment.

In September, he told a town hall that gay people die "at least 20 years earlier," and should adopt a "normal lifestyle."

That same month he stated that Asheville, NC was a "cesspool of sin."


“We are deeply saddened to hear of Senator Forrester’s death and send our prayers out to his wife, Mary Frances, and all of his family. Those of us who have worked in politics with Senator Forrester for years know him as an honorable and kind man who always stood for what he believes and fought to defend the values that made North Carolina and America great. Jim Forrester’s life is a model of public service, as a family physician, as a general in the national guard, Gaston County Commissioner and for the last 22 years as Gaston County’s senior State Senator. He will truly be missed by those of us in his GOP family.”


Adam Searing of The Progressive Pulse wrote of Forrester's evolution in politics, from "improving health care, passing protections for people in HMOs, and working to improve the state’s Medicaid program" to "actions and statements revealing such intolerance and hatred."


In the end, we can’t turn our eyes away from the increasingly strident and hateful role Forrester played in social politics in our state over the last few years. But a reflection of his whole life should include as well the positive contributions he made that affected many people as well.