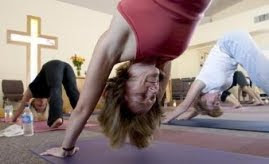 Now he's going on about how yoga is of the devil.


Yoga is...in fact demonic. By demonic I mean it’s a spiritual act to a being other than the God of the Bible. And, for those unfamiliar with me, I’m no raging Christian fundamentalist.


My most vocal critics tend to be from the fundamentalist tribe as I do drink alcohol, have been known to use strong language, and talk very frankly about the joys of married sex. I’m no prude, but I am a pastor.

A few things. Jesus drank alcohol, used strong language. The Bible is full of frank talk about the joys of married sex. You're a prude.

Here are more of Driscoll's thoughts on yoga:


As Christians, we must be intellectually honest and respect that yoga is in fact intertwined with Hindu religious practice. They have a right to be offended as much as we would be equally offended if they underwent Christian baptism or communion while denying any religious connection and secularizing it or doing it in a Hindu way.

* * *
Consciousness can be altered through the practice of rite and ritual. Magic is the manipulation of objects, substances, spirit entities, and minds, including humans and demons, by word (rituals like yoga, incantations like om, curses, spells, etc.) and objects (charms, amulets, crystals, herbs, potions, wands, candles, etc.).

* * *
Whether they know it or not, Christians who engage in yoga are participating in a religious expression that is antithetical to Christianity. The result is often an unguarded spirit that is susceptible to the many lies of Satan and a slow, almost unperceivable degradation of faith and Christian truth in one’s life.

* * *
Yoga is a religious philosophy that is in direct opposition to Christianity. Thus, in its true form, yoga cannot be simply received by any Christian in good conscious. To do so would be to reject the truths of Scripture and thus Jesus himself.

So what is a Christian to do? Can Christians co-opt yoga and do it in a Christian way, say, by praying to Jesus while they stretch and do yoga poses while listening to praise music?


My advice is to not attempt to redeem yoga properly understood, as it is a system of belief that is unchristian, against Scripture, and thus demonic in nature. You cannot redeem such a thing.

So, in conclusion, Christians must reject yoga, as defined here. I’d also go so far as to say you should reject the term “yoga,” as it is impossible to divorce it from its historical and spiritual context without much explanation and linguistic gymnastics. Instead, feel free in Christian liberty to stretch however you’d like, participate in exercise, calm your nerves through breathing, and even contemplate the Scriptures in silence. But do so in a way that does not identify with yoga and non-Christian mysticism. Do not seek to negate your mind, but rather renew your mind with the Word of God. Do not seek to empty yourself, but rather be filled with the Holy Spirit. Do not seek to turn into yourself for enlightenment, but rather look out to the God of the Bible. Do not seek to become one with the universe, but rather be reconciled to God through Jesus Christ.

Mark, Christians can practice yoga and remain Christians. Millions of them do it every day. I know many of them.

I also know people who trick-or-treat without becoming pagans, wear green on St. Pat's without turning Irish, and listen to Melissa Etheridge without turning into lesbians.