That's Not In The Bible: Phantom Passages and Biblical Illiteracy

CNN's Belief Blog has an interesting look at sayings, proverbs, and quotes that people often inaccurately attribute to scripture. 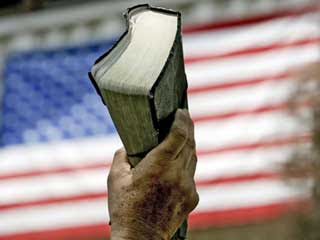 A handful of examples:

"Cleanliness is next to Godliness."

"Spare the rod, spoil the child."

“God helps those that help themselves.”

None of these phrases appear anywhere in the bible.

There are many things that play into the emergence of such "phantom passages." The number one culprit is ignorance. Most who profess to love and live by The Bible have not actually read very much of it. Confusion is another factor. Sometimes the phantom passage is a distillation of a concept found in scripture (i.e. "Spare the rod" is likely a loose distillation of Proverbs 13:24: "The one who withholds [or spares] the rod is one who hates his son."

I have added some more quotations that are often inaccurately attributed to The Bible:

"Money is the root of all evil."

"Moderation in all things."

"God will not give us more than we can bear."

Aside from mis-attributed quotations, there are also numerous stories from the Bible that have become distorted over the years as people have passed them along in Bible classes, sermons, or in the living room. CNN points out the following examples:

Those details may seem minor, but scholars say one popular phantom Bible story stands above the rest: The Genesis story about the fall of humanity.

Most people know the popular version - Satan in the guise of a serpent tempts Eve to pick the forbidden apple from the Tree of Life. It’s been downhill ever since.

But the story in the book of Genesis never places Satan in the Garden of Eden.

“Genesis mentions nothing but a serpent,” says Kevin Dunn, chair of the department of religion at Tufts University in Massachusetts.

“Not only does the text not mention Satan, the very idea of Satan as a devilish tempter postdates the composition of the Garden of Eden story by at least 500 years,” Dunn says.

To most, this is not a big deal. In most cases, the gist of the story is intact -- and let's not fool ourselves, these are simply stories. But what this does illuminate is the fact that most religious people do not really know this book which serves as a foundation for their lives.  And, as the CNN article notes, we tend to infuse the Bible with our own values and morals, rather than the other way around.

Take, for instance, the case of the phantom passage, "God helps those that help themselves." As mentioned above, this can be found nowhere in the Bible. It is so often cited as a validation of self-reliance, or to justify our voracious appetites for capitalism and consumerism. It evokes a reluctance to provide for others. No, this is not a biblical quotation.  It can, however, be attributed to Ben Franklin.

Sidnie White Crawford, a religious studies scholar at the University of Nebraska, states:


Yet that passage contradicts the biblical definition of goodness: defining one’s worth by what one does for others, like the poor and the outcast, Crawford says.

Crawford cites a scripture from Leviticus that tells people that when they harvest the land, they should leave some “for the poor and the alien” (Leviticus 19:9-10), and another passage from Deuteronomy that declares that people should not be “tight-fisted toward your needy neighbor.”

These examples point to a big problem in America, where, despite the Establishment Clause, scripture finds its way into the political sphere, informing everything from war to healthcare to presidential elections.  It's dangerous enough that we must tolerate religious ideology in public affairs, without having to worry about faux religious ideology.

From the March 22, 2007 cover story in TIME Magazine, The Case for Teaching The Bible:


Nearly two-thirds of Americans believe the Bible holds the answers to "all or most of life's basic questions," but pollster George Gallup has dubbed us "a nation of biblical illiterates." Only half of U.S. adults know the title of even one Gospel. Most can't name the Bible's first book. The trend extends even to Evangelicals, only 44% of whose teens could identify a particular quote as coming from the Sermon on the Mount.

I know that many secular folks would argue that a diminishing understanding of an ancient religious text is not such a bad thing. Surely, they may think, every dead religion once had a period where people began to lose interest in, and knowledge about, their religious stories -- this is just one more instance of that.

Biblical illiteracy is a problem. Not because we need to be more religious as a society, but because the Bible is the most influential book (or, more accurately, collection of writings) on the face of the earth.  It informs countless literary works.  It reverberates throughout history and politics. One cannot study Lincoln, Martin Luther King Jr., or even George W. Bush without encountering allusions to biblical writings. Many of us would not last very long in a sales job if we only knew the name of one or two products in the company's inventory.  A chemist would be laughed out of the lab if he could only recall a handful of elements (and several faux-elements that were nowhere on the periodic table). Can you imagine receiving a lifeguard certificate only knowing the first step of CPR?  Why is it that we can ascribe to a belief system of which we apparently know so little about?  Not that everyone needs to have exhaustive knowledge of their belief system -- we can never know enough. But the figures from the TIME Magazine story illustrate a level of illiteracy that would be unacceptable in most areas of our lives.

Although much good is inspired by scripture, The Bible is used on a daily basis to justify violence, oppression, and discrimination (of course other religious texts do as well).  Most often, these justifications, like the phantom passage examples above, are distorted, erroneous distillations of passages devoid of context. They are often cherry-picked from larger passages which, if the context were understood, might encompass an altogether different sentiment or meaning. Too often, passages which are used to justify violence, hatred, or oppression, are adjacent to other passages that are ignored for their lack of relevance in modern society (but somehow, the cherry-picked passage is perfectly applicable).

Polls suggest that that over 60% of Americans favor secular teaching about the Bible.  Obviously, teaching the Bible, from a literary, historical-critical perspective would be a tough sell in America. Many evangelicals would have issues with this type of warts-and-all presentation that did not include a sales pitch, and many liberals (and those of other faiths) would have issues, since it would be difficult to ensure that teachers were teaching instead of preaching. Other faiths might wish that their holy books get equal time (maybe not such a bad idea, either).  And certainly some vocal atheists would object from the get-go on the grounds that religion is not appropriate for public schools, period, no matter how it is presented.

If anything, our society needs to have a better understanding of the writings which have so greatly influenced our society. We should be familiar with the Constitution and the Bill of Rights, the great speeches from American history (Gettysburg Address, MLK's "I Have a Dream" speech, Daniel Webster's Plymouth Oration, etc.), and the American literature which has contributed to our culture, and which reflects our past ("Huckleberry Finn," "The Great Gatsby," "The Scarlett Letter," "Invisible Man," etc.). Why is the Bible any less important for Americans to be familiar with?

One benefit that would come from a more biblically literate America would be a decline in scriptural literalism. As we saw above, from the examples of phantom passages, and from the surveys showing our lack of knowledge of what is actually in The Bible, the majority of Americans possess a blind allegiance to something that they truly do not understand.  This is not only embarrassing, it is dangerous.  Biblical literalism leads to a variety of societal ills, including the denial of science, the denial of human rights, sickness, and death. It leads to the rejection of logic.

If we, in our time, have erroneously associated this many quotations and passages to The Bible, we can only begin to imagine the misconceptions and embellishments contained within its very pages.
Posted by eshep on 6/06/2011