Rick Perry's 'Response: A Call to Prayer For a Nation in Crisis'

From the Church Meets State files: 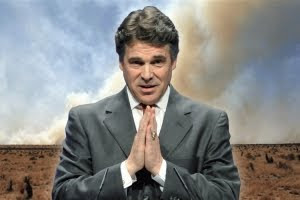 Texas Governor and potential GOP presidential candidate Rick Perry wants you to join him in Houston on August 6.  He wants you to "take your place in Reliant Stadium with praying people asking God’s forgiveness, wisdom and provision for our state and nation. There is hope for America. It lies in heaven, and we will find it on our knees."

Right now, America is in crisis: we have been besieged by financial debt, terrorism, and a multitude of natural disasters. As a nation, we must come together and call upon Jesus to guide us through unprecedented struggles, and thank Him for the blessings of freedom we so richly enjoy.

Some problems are beyond our power to solve, and according to the Book of Joel, Chapter 2, this historic hour demands a historic response. Therefore, on August 6, thousands will gather to pray for a historic breakthrough for our country and a renewed sense of moral purpose.

It's certainly interesting that a Governor of a state which includes citizens of all faiths (and non-believers) would hold an event which so clearly favors one particular brand of religion. What exactly is going on here, Rick?

From the Response FAQ:


What Does The Response Believe?

We believe the Bible to be the inspired, the only infallible, authoritative Word of God.

We believe that there is one God, eternally existent in three persons: Father, Son and Holy Spirit.

We believe in the deity of our Lord Jesus Christ, in His virgin birth, in His sinless life, in His miracles, in His vicarious and atoning death through His shed blood, in His bodily resurrection, in His ascension to the right hand of the Father, and in His personal return in power and glory.

We believe that for the salvation of lost and sinful people, regeneration by the Holy Spirit is absolutely essential.

We believe in the present ministry of the Holy Spirit by whose indwelling the Christian is enabled to live a godly life.

We believe in the spiritual unity of believers in our Lord Jesus Christ.


Why is The Response happening? Why should I come?
We believe that America is in a state of crisis. Not just politically, financially or morally, but because we are a nation that has not honored God in our successes or humbly called on Him in our struggles. According to the Bible, the answer to a nation in such crisis is to gather in humility and repentance and ask God to intervene. The Response will be a historic gathering of people from across the nation to pray and fast for America.

Who else will be there?
Governor Rick Perry has invited all US governors as well as many other national Christian and political leaders. People of all ages, races, backgrounds and Christian denominations will be in attendance to proclaim Jesus as Savior and pray for America.

A few questions they left off of the FAQ:

Has Rick Perry ever read the Establishment Clause of the Constitution?

This event is sponsored by a hate group. You guys know that, right?

Are you out of your fucking mind?

Email ThisBlogThis!Share to TwitterShare to FacebookShare to Pinterest
Tags: batshit, rick perry, separation of church and state, the response