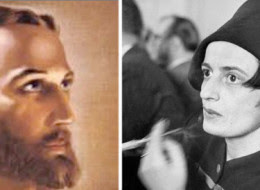 Much has been said, since the recent rise in popularity of Ayn Rand among conservatives, about the incompatibility of Rand's Objectivism with the teachings of Jesus. In many ways, they may seem like a perfect fit. Conservatives love capitalism as much, or more, than they love Jesus.

One of the most amusing aspects of the right's love affair with Rand is the fact that she was a staunch atheist who was highly critical of religion. She also happened to be pro-choice and (arguably) a feminist. But either her fans have overlooked these facts in favor of her brand of cold-hearted, free market capitalism and self-reliance, or they are unaware of how much she actually resembled Hillary Clinton. It is, more than likely, a textbook case of willful ignorance.

Most of the accusations of hypocrisy have come from the secular left (and from people who actually like good literature). And, we know full well that conservatives don't listen to those people.

Enter The American Values Network, a progressive faith group started by a former Hillary Clinton aide. The organization has launched an aggressive campaign to pit Jesus and Rand against each other, and to urge Christians to reject the philosophies of Rand.  It's one or the other, they say.  You can't have them both.

I'm not crazy about the ad. I'm not crazy about political faith groups. (I prefer to keep faith and politics in their own separate baskets.) I don't like the way they vilify Rand for her atheism, when there are actual, valid shortcomings to point out (like the fact that her novels are not very good). One absolutely can be an atheist and live a moral life (that is one thing that Rand got right).

But I do like the ad for its bluntness, and its honesty. It's true: even an atheist would tell you that you can't subscribe to Rand's Objectivism and still call yourself a follower of Jesus.
Posted by eshep on 6/10/2011