Biblical Literalism and Circular Logic: Protecting the House of Cards 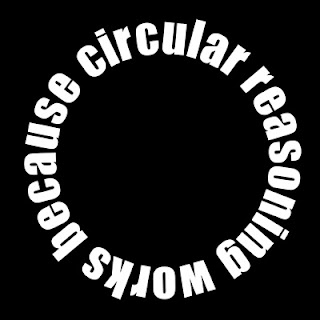 Answers in Genesis, the organization behind The Creation Museum and the forthcoming Ark Encounter theme park, are no strangers to circular logic.  It's pretty much the foundation of their evangelistic philosophy, which boils down to the following: "The Bible is literally true, because The Bible tells us it is literally true. If any of it is not literally true, then we can't trust any of it, and that's not possible."

Take Dr. Georgia Purdom's March 10 blog entry at Answers in Genesis, "Is The Virgin Birth Really That Important To the Christian Faith?"  In this entry Purdom criticizes the liberal theology of folks like Rob Bell, whose latest book challenges some of Christianity's longstanding literal interpretations of scripture.  She states: "If the virgin birth of Jesus Christ is not true, then Jesus is not God and the Bible is not true...if the doctrines of creation and the Fall aren’t true, then the whole birth, death, and resurrection of Jesus Christ is pointless!"

Earlier, on March 7, Answers in Genesis president/CEO and founder Ken Ham posted a piece entitled "Maligned by Ken Ham?" in which he defends AiG's young-earth views against the BioLogos Foundation, who are working to prove that religion and science can co-exist.  BioLogos accepts (and promotes the teaching of) evolution.  Ham writes, "If there was not one man Adam and one woman Eve, and a literal event of the one man Adam taking the fruit in rebellion and thus bringing sin and death into world, then one may as well throw the rest of the Bible away. It would mean what God wrote through Paul in 1 Corinthians 15 and Romans 5 for instance is plain wrong. If we are not all descendants of one man who sinned, then who are we, and why are we sinners?"

A recently posted article on the historical accuracy of Genesis states: Genesis 1–11 should be understood as literal history. Jesus and the New Testament authors viewed it as such, and the internal consistency of Genesis demonstrates its historical nature. Consequently, to interpret Genesis 1–11 in the same way Jesus did, you must treat the passage as historical narrative and follow the standard principles of interpretation. When you do this, it is clear that God created everything in six normal-length days approximately six thousand years ago.

The shorter version: Genesis 1-11 is literally true because the Bible says so.

I can't prove to you that the virgin birth did not occur any more than I can prove that Muhammad did not fly on the back of a winged horse. But given what we know about biology and the laws of physics, we can safely conclude that these incidents did not occur as reported in scripture. It's certainly not difficult for Ham or Purdom to dismiss the Muhammad claim.  In fact, I'm sure they use similar logic that I use to dismiss the Muhammad claim, which is essentially: We have no evidence whatsoever that flying, winged horses existed, and therefore we can safely conclude that this did not occur.

By the same token, we have overwhelming evidence that the Earth is approximately 4.5 billion years old.  Even if we generously allow a margin of error of a few million years (as most scientists do), it's a far cry from 6,000 years. We also have mountains of fossil, molecular, and anatomical evidence supporting the fact that mankind evolved over millions of years from simpler lifeforms.  This leaves me with no choice but to dismiss Adam and Eve as mythology.

But to state that the virgin birth, the Genesis creation story, and the Adam and Eve narrative are true because the Bible says they are true is circular logic. The mission statement of Answers in Genesis reads, in part, "We proclaim the absolute truth and authority of the Bible with boldness."  So it goes without saying that AiG's entire existence is at stake, and any compromise on their part would threaten the organization's very existence.

Denialism is a bitch.  Many individuals approach compromise in their faith the same way AiG approaches compromise. To admit that certain claims in the Bible are not true would mean that they have to reevaluate beliefs which had been treated as truths for a large part of their lives.  They begin to feel as if the whole house of cards might come down.

To be clear, those who deny the age of the earth are not as small a minority as one might think.  According to a 2010 Gallup poll, around 40% of Americans align with the beliefs of Young Earth Creationism (that the heavens and the earth were created by the Abrahamic God in six days approximately 6-10k years ago), rising to over 50% among Republicans. Approximately 75% of Americans believe in the virgin birth of Jesus.

Michael Shermer, publisher of Skeptic magazine and columnist for Scientific American says, "[Denialism] is the automatic gainsaying of a claim regardless of the evidence for it - sometimes even in the teeth of evidence. Denialism is typically driven by ideology or religious belief, where the commitment to the belief takes precedence over the evidence. Belief comes first, reasons for belief follow, and those reasons are winnowed to ensure that the belief survives intact.”

It is our natural tendency to believe only the evidence which fits into our preconceived ideas -- ideas that for many of us were presented to us as fact while we were children, and which we nurture our whole lives.  It is a natural tendency to seek and embrace only the information which backs up these beliefs.

It is a difficult thing to alter one's beliefs.  Which is easier -- to continue to believe everything we've been taught and to ignore nagging doubts, or to completely overhaul our entire belief system?   The former only requires compartmentalization -- perhaps some denialism.  The latter can greatly affect our everyday life.  Millions of people build their entire lives around their faith.  Their faith often forms a basis for their communities, their friends, their activities.  It is incorporated into major life events: births, marriages, deaths.  Many believe that without their faith their life lacks purpose, or that without a rewarding afterlife where they are reunited with their loved ones, the pain of death may be too hard to bear.  It is not difficult to see why people might be hesitant to deny the virgin birth, or the resurrection, or any number of scriptural claims that are central to one's faith. To do so could affect their marriages, their social life, their standing in the community, or even their careers. It can be a serious commitment to rethink one's faith. And who has time for more commitments these days?

When the evidence against the extraordinary claims of scripture is overwhelming, the only thing many have left is circular logic. If we start with the premise that the Bible is the literal word of God, then we must dismiss any evidence that does not support our premise. We see this all the time in the anti-evolution community. If one were to pore over the numerous anti-evolution articles on the AiG site, it would quickly become clear that their tactics are very similar to any denialist tactics (anti-vax, climate change denial, etc.), such as criticizing relatively insignificant aspects of the larger theory, using anecdotes (often untrue) to cast doubt, or by distracting people from the evidence with character assassination and negative associations.

The reason many religious literalists use circular logic is because, quite simply, it is the only logic they have. Talking snakes and donkeys? A talking, burning bush? Walking on water? Parting the sea? Woman from a rib? Ascending bodily into heaven? The Bible says these are true, so they must be. If they didn't happen, then the Bible is not true, and then everything is pointless.

It doesn't have to be that way. Yes, for some (myself included), admitting that parts of the Bible are not true may lead to eventually leaving religion behind altogether. But even more have found a way to see these stories as literature, poetry, myth, or parable, and still retain their belief in a God, and remain a follower of Jesus's teachings. And to those folks, I can imagine that the beauty of evolution is a much more satisfying and awe-inspiring origin story than a dude made out of dirt. I also imagine that viewing the virgin birth as myth doesn't take away from the beauty and kindness associated with the Christmas holiday.

But it's starting to get a little silly, in this age of accelerated scientific discovery, to embrace claims that would be silly under any other circumstances, simply because the source of those claims claims that the claims are true.
Posted by eshep on 3/11/2011