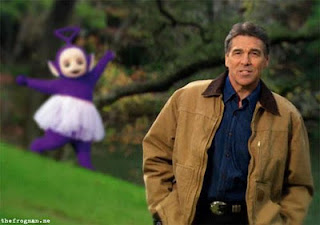 Rick Perry responded to the public reaction to his homophobic theocratic abomination of a political ad in an interview with Wolf Blitzer on CNN.

In the interview, he doubled down on his anti-gay rhetoric, stating that he'd reinstate DADT if elected. He also defended discrimination against gays by the Boy Scouts and Catholic charities.

When pressed by Wolf on the issue of DADT, Perry served up one of his famous 'gut feeling' answers (if you recall, when Perry was asked how he knows abstinence works, he replied that he knows it works, "from my own personal life."


BLITZER: But military commanders tell me, in the past few months since the policy has changed, they’ve had no problems. Including the commandant of the Marine Corps, who was originally opposed.

PERRY: Well, I’m just telling you the members of the military I talked to, when this was being talked about, I didn’t talk to anyone who was for it…


When pressed on the topic of Obama's 'war on religion,' Perry didn't fare much better, and resorted to McCarthy-esque absurdity, ignoring the many instances of Obama publicly embracing religion.


PERRY: We’ve got a federal judge, for instance, in San Antonio that said these kids can’t say an invocation at school. I mean, they say you can’t even use the word “invocation” at their commencement.

BLITZER: Is that President Obama’s war on religion?

PERRY: I’m just giving you some examples of what we’re seeing from the left, of which, I would suggest to you, President Obama is a member of the left and, uh, substantial left of center beliefs, that you can't even have a Christmas party. You can't say a prayer at school.


Rick Perry is ignorant, ladies and gentlemen. He is dumber than a bag of hammers. Sure, we hear the old 'why can't my kids pray to Jesus at their public school' thing from our ignorant uncle on Facebook, but this guy is the Governor of Texas, and a potential (although unlikely, at this point) candidate for the highest office in the country.


PERRY: I ask people, 'Which one of the Ten Commandments do you not like?' I mean, why aren't our children allowed to pray in school? Why can they not celebrate Christmas? Those are, I think, traditional and solid American values that we're seeing trampled upon by this Administration.


Well, Rick, I'll tell you the problem with the ten commandments. Four of them are solely religious edicts that have nothing to do with ethics or law, and three of them are one-dimensional prohibitions that are irrelevant to modern law. So, as a non-religious tax-paying American citizen, I don't care for the enshrinement of religious edicts. That kind of reeks of theocracy. You're not crazy about Sharia Law, so I'd think you'd be able to get your head around this.

Why aren't our children allowed to pray in school? They can pray all they want. Prayer is very much protected in public schools by our Constitution. There are simply some restrictions -- mostly that prayer can't be mandatory, and you can't have 'sanctioned' prayers during school time or school events. Because, see, that would be forcing it on someone who has the right to not be proselytized to as part of a captive public school audience. I am sure that if you imagine a teacher leading the class in an Islamic prayer, you can understand how this might not be cool, Rick.

Why can't they celebrate Christmas at school? Well, first of all, Christmas has in no way been banned in public schools. Again, there are simply rules that are appropriate to follow to avoid alienating students or identifying them with a religion not their own. Because, Rick, aside from the above issues relating to proselytizing, we live in a melting pot. It's not as homogeneous as it was when you were a kid. If you want the kids to celebrate Christmas in school, then maybe we need to provide equal time for other religions. Here you go -- here's an inclusive, interfaith calendar of several dozen holidays and festivals observed by Americans. Good luck getting any actual teaching done.

Here's the Blitzer-Perry video, for those who are interested in killing a few brain cells: