The We Do Campaign

Via Campaign For Southern Equality: 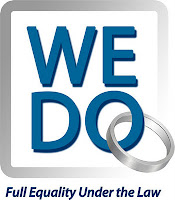 Since the WE DO Campaign launched on October 3, eighteen same-sex couples have requested – and been denied – marriage licenses at the Buncombe County Register of Deeds Office in Asheville, NC. The purpose of the campaign is calling for full equality under federal law for lesbian, gay, bisexual, and transgender (LGBT) people and resisting an unjust state law in North Carolina that prohibits marriage equality.

“There comes a time when you can no longer live as a second-class citizen and when you are called by your conscience to directly resist those laws that treat you as unequal,” says Jasmine Beach-Ferrara, Executive Director of the Campaign for Southern Equality and a candidate for ordination in the United Church of Christ. “We are saying, simply, we are equal people and laws that treat us as unequal, must change. We will continue to resist them until they do.”

On October 14, the final day of this phase of the campaign, Rev. Joe Hoffman and Rev. Cartledge will lead a public, interfaith blessing of all LGBT families at Roger McGuire Green, in front of the Buncombe County Courthouse. They will be joined by clergy from across faith traditions and from across the country. Following the blessing, clergy and community members will lead a large public action, which will be followed by an act of civil disobedience.

I'm not sure how anyone can watch the below video and not be overcome with sadness and frustration. To think that many out there feel a sense of satisfaction from viewing it is even more depressing.

Hopefully, for many, this video will serve to show how wrong these archaic laws truly are. We will look back on this time in history in shame and disbelief.

If you are in the Asheville area and wish to show your support for equality, you con read about today's schedule here.