For those of you who have wondered why God has been on literary hiatus for 1,400 years, you will be pleased to know that a new tome is on the way.

The Last Testament: A Memoir, by God (with help from former executive producer of The Daily Show, David Javerbaum) will be available November 1. 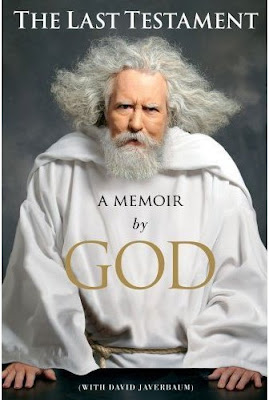 In this new Good Book, God addresses several important topics, such as why He loves America, what He listens for in a good prayer, and which celebrities "are totally gay."

Most importantly, God finally reveals how he handles all those sports-related prayers.


And so that is why I have never, ever, ever, influenced the outcome of a sporting event to determine the winner.

I have only, on extremely rare occasions, influenced the outcome of a sporting event to affect the spread.


But perhaps most shocking to readers will be God's story of Adam and Steve, "the real first couple."

The Advocate has excerpted this story for your reading pleasure. It begins:

2 It is often said — and even more often screamed at anti–gay marriage rallies outside the statehouse in Lansing — that I created Adam and Eve, not Adam and Steve.

4 Now will I tell the story of the first man, Adam; and of the companion I fashioned for him, Steve; and of the great closeting that befell their relationship.

5 For after I created the earth, and sea, and every plant and seed and beast of the field and fowl of the air, and had the place pretty much set up, I saw that it was good;

6 But I also saw, that by way of oversight it made good administrative sense to establish a new middle‑managerial position.

7 So as my final act of Day Six, I formed a man from the dust of the ground, and breathed life into his nostrils; and I called him Adam, to give him a leg up alphabetically.

8 And lo, I made him for my image; not in my image, but for my image; because with Creations thou never gettest a second chance to make a first impression;

9 And so in fashioning him I sought to make not only a responsible planetary caretaker, but also an attractive, likeable spokesman who in the event of environmental catastrophe could project a certain warmth.

10 To immediately assess his ability to function in my absence, I decided to change my plans; for I had intended to use Day Seven to infuse the universe with an innate sense of compassion and moral justice; but instead I left him in charge and snoozed.

11 And Adam passed my test; yea, he was by far my greatest achievement; he befriended all my creatures, and named them, and cared for them; and tended the Garden most skillfully; for he had a great eye for landscape design.

12 But I soon noticed he felt bereft in his solitude; for oft he sighed, and pined for a helpmeet; and furthermore he masturbated incessantly, until he had well‑nigh besplattered paradise.

13 So one night I caused him to fall into a deep sleep; fulsomely did I roofie his nectar; and as he slept, I removed a rib, though not a load‑bearing one.

14 And from this rib I fashioned a companion for him; a hunk, unburdened by excess wisdom; ripped, and cut, and hung like unto a fig tree before the harvest;

16 And Adam arose, and saw him, and wept for joy; and he called the man Steve; I had suggested Steven, but Adam liked to keep things informal.

17 And Adam and Steve were naked, and felt no shame; they knew each other, as often as possible; truly their loins were a wonderland.

18 And they were happy, having not yet eaten of the Tree of the Knowledge That Your Lifestyle Is Sinful.

Continue the story of Adam & Steve here at The Advocate.

In addition, the chapter on sports can be read at Scribd.