A reader replied to the post Why A Heterosexual, Married, North Carolinian Father Of Three Cares About LGBT Equality with a comment that has been echoed by many: 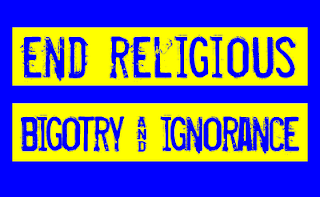 Overall, an excellent argument, somewhat marred by the author's sneer at religion, as though all religious people are against same sex marriage (and ignorant, to boot). As a UU minister who has officiated at many same-gender weddings, certainly I support the right-to-marry movement (on civic and religious grounds). But if the author wants to understand mean-spiritedness toward issues based simply on one's personal limited grasp of or appreciation for the issue, he should re-read his remarks related to religion, which I find offensive. Like him, I despair when religion or "bibleism" is used to stand in the way of what I consider to be a civil right, but individuals' religious perspective and identity can easily be as varied and as complex as their sexual orientation and gender identity. I have no problem with the author's embrace of Humanism (which is also variously understood by its proponents), but his Humanism neither entitles nor qualifies him to define and dismiss all religion. That he has done so makes him guilty of the same kind of arrogance and injustice he decries in homophobes.


There have been many comments that deserve to be addressed, but I wanted to clarify my comments on religion, since comments keep coming in, and since I feel it is an important component to the ongoing dialogue about LGBT equality.

My response to the commenter:


I'm uncertain why you find my comments so mean-spirited, arrogant, or injust. My comments in that paragraph state that, as someone who does not subscribe to religion, it is a violation of my rights to impose on me (and others who do not subscribe to religion -- or who do not participate in religious bigotry) legislation that is based on religious ideology -- particularly such ideology that does has no secular use.

In no way am I sneering at those who are religious. If you read my other posts, it will become clear to you that, although I have no stomach for religious bigotry or the encroachment of religion on policy, I believe that there are many religious people who are compassionate, progressive, and who do much good in the areas of social justice and equality.

Whether or not you want to admit it, religious bigotry is most often the root of anti-LGBT sentiment. And as my comments state, religion has no place in legislation. If you find it insulting that I refer to such religious ideas as supernatural, or superstition, then I can't help you there. Religion *is* supernaturalism, and it *does* involve superstition.

There is a difference.


I can't stress enough how important the faith community is to this issue. I believe it to be of utmost importance that churches, religious organizations, and religious leaders speak up about LGBT equality and the May 8 anti-LGBT Amendment vote. I have all the time in the world for Christian bloggers John Shore and Mark Sandlin, both of which are among the most important voices in this dialogue about religious bigotry.

Even the seasoned equality activists fighting the NC amendment are very insistent that this is not about religion. It's about religious bigotry, which many religious people abhor.

I am careful not to condemn religion. But I have no problem whatsoever condemning religious bigotry.