You will often hear, during arguments for or against same-sex marriage, that "it's not about religion."

I have personally been urged on occasion (by religious and non-religious folks) to not stress the religious aspects of the debate. It makes sense that people would want to avoid the faith discussion while fighting for something so important. Mostly, because people do not like to have their faith challenged.

While Americans are not reluctant to inject religion into politics, faith is, at its core, a very private matter. An assault on faith, or even aspects of one's faith, is often perceived as an assault on one's very being.

I don't think we need to shy from the discussion. It's the elephant in the room. It is in many ways the crux of the entire debate.

While many point to scripture to argue against LGBT equality and same-sex marriage, there are many devout religious folks who are pointing to scripture to advocate for acceptance, tolerance, and change.

Via the LA Times:


State Sen. Mary Margaret Haugen is a committed Christian who was a swing vote on Washington's gay-marriage bill. When she finally decided to vote yes late last month, she wrote a blog post explaining her reasons, which beautifully lays out the case for why people of faith should set aside their personal prejudices in the name of equality.

"I have very strong Christian beliefs, and personally I have always said when I accepted the Lord, I became more tolerant of others," Haugen wrote. "I stopped judging people and try to live by the Golden Rule. This is part of my decision. I do not believe it is my role to judge others, regardless of my personal beliefs. It's not always easy to do that. For me personally, I have always believed in traditional marriage between a man and a woman. That is what I believe, to this day. But this issue isn't about just what I believe. It's about respecting others, including people who may believe differently than I. It's about whether everyone has the same opportunities for love and companionship and family and security that I have enjoyed."

In addition to Haugen, Gov. Christine Gregoire, who introduced the legislation, reconciled her religious views with equality, changing her views that she had held for years.


“It’s time, it’s the right thing to do,” Gov. Christine Gregoire said Wednesday as she introduced legislation to legalize same-sex marriage in the state.

It was clearly an emotional day for Gregoire, who is in her final year in office and who up to now has publicly opposed gay marriage. Indeed, she let it be known that since being elected she has struggled privately with this issue.

“I have not liked where I have been for seven years,” she said Wednesday at an event with several gay marriage supporters to announce her proposal. “I have sorted it out in my head and in my heart, and what’s more important to me is, I believe in equality and respect of all citizens.”

Her struggle, she said, was her religion. She’s a practicing Catholic, a church that doesn’t support gay marriage.

“Some say domestic partnerships are the same as marriage,” the governor said Wednesday. “That’s a version of the discriminatory separate but equal argument of the past.”

The governor announced what she called historic legislation to legalize same-sex marriage.

“Our gay and lesbian families face the same hurdles as heterosexual families—making ends meet, choosing what school to send their kids to, finding someone to grow old with, standing in front of friends and family and making a lifetime commitment,” Gregoire said.

“For all couples, a state marriage license is very important. It gives them the right to enter into a marriage contract in which their legal interests, and those of their children, if any, are protected by well-established civil law.”

Here in North Carolina, opponents of the same-sex marriage ban have an uphill battle. This is, after all, the Bible Belt.

That being said, you will not find a shortage of religious leaders, pastors, and organizations, who have no problem reconciling their religious beliefs with support of same-sex marriage.

Take the following Statement of NC Clergy and Faith Leaders Against the Anti-LGBT Constitutional Amendment, with over 300 signatures, posted at Equality NC's Website, as well as the Website of the Coalition to Protect All NC Families:


As people of faith, clergy and leaders in our faith traditions, we are mandated by God to demonstrate and protect love in all its forms and to stand for justice for all of creation. In faithful response to this calling, we commit ourselves, along with thousands of other Christians, Jews, Muslims and other people of faith around North Carolina, to these basic principles:

While we respect the fact that debate and discussion continue in many of our religious communities as to the scriptural, theological and liturgical issues involved, we draw on our many faith traditions to arrive at a common conviction. We oppose the use of sacred texts and religious traditions to deny legal equity to gay and lesbian people.

We oppose any amendment to the North Carolina Constitution that would prohibit gay and lesbian couples from receiving the protections like health benefits and hospital visitation afforded by recognition of their relationships.

We affirm freedom of conscience in this matter. We recognize that the state may not require religious clergy to officiate at, or bless, gay and lesbian marriages. Likewise, a denial of state civil recognition dishonors the religious convictions of those clergy, supported by their faith communities, who officiate at and bless gay and lesbian marriages.

As people of faith, we, the undersigned, urge the North Carolina State Legislature to protect families in North Carolina by opposing the anti-LGBT constitutional amendment.

Conservative Christians might believe that the 300-plus who signed the statement would belong solely to the liberal persuasion, i.e. those who subscribe to a lenient and unrecognizable Christianity. That would be untrue. The list features signatures of leaders from a broad spectrum of religious affiliations: Baptist, Methodist, Lutheran, Presbyterian, Unitarian Universalist, Jewish synagogues, United Church of Christ, Episcopal, Quaker, Mennonite, Buddhist, etc. Truly an example of unity in faith. 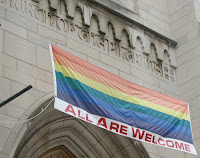 The list of signatories is astounding, including the President of the NC Council of Churches (as well as former presidents and board members), the Chair of Religious Affairs for the NC-NAACP, several bishops of the Episcopal Diocese, deacons, elders, rectors, military chaplains and priests.

Pastor Richard Edens of United Church of Chapel Hill states, "I think there are a growing number of people who want the Constitution to reflect the inclusiveness represented in the Gospel."


"When we vote on the rights of others, it becomes a moral and spiritual issue."

"We are called as religious leaders to speak with the depth of our faith and to speak truth to power in the face of injustice. If I were to be silent, in some ways it would be easier. But I have the opportunity to speak in behalf of my congregation, to speak up for those who don't have a voice."

Donna Miller, a wife and mother of two who attends Morning Star Lutheran Church in Mint Hill, states, "I believe I'm well inside my beliefs as a Christian to believe in same-sex marriage...Above all, you love everyone, and you don't judge."

The Rev. Dr. William J. Barber III, of the NAACP, wrote in an official statement on the ban initiative:


"A vote on the same sex marriage amendment has nothing to do with your personal opinion on same sex marriage but everything to do with whether or not you believe discrimination should be codified and legalized constitutionally...No matter our color. No matter our faith tradition...No one, especially those of us whose forebearers were denied constitutional protections and counted as 3/5ths of a vote for their slave-masters and mere chattel property for other purposes in the old Constitutions-none of us should ever want to deny any other person constitutional protections."

As should be clear, it is entirely possible, and in many cases, quite easy, to reconcile one's religious beliefs with a vote against the same-sex marriage amendment to the NC state constitution.

If, as a person of faith, you can't bring yourself to vote against the amendment, ask yourself why. How are these 300+ religious leaders and members of clergy able to reconcile their faith with a 'No' vote? Which approach is truly aligned with justice, love, and charity? Which approach is truly aligned with the freedoms and liberties afforded to all citizens of our great state? As Rev. Dr. Barber asked, do you believe discrimination should be codified and legalized constitutionally?

Whether or not your beliefs allow you to do so, you must remember that same-sex marriage is already illegal in North Carolina. What you are doing, by voting for the same-sex marriage ban amendment, is quite simply enshrining discrimination into our state constitution.

If there is a common denominator found in all humans, religious or not, it is the desire to go about our lives on earth with a basic set of rights, including the freedom to pursue happiness in a peaceful society. We are sophisticated enough to stop attacking each other for our differences, and to start focusing on our similarities. We are too good to spend time denying others the very things each of us desires in life.